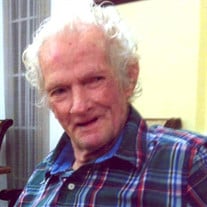 Graveside services for Mr. Rex Hale, 87, of Henderson, will be held at 10AM on Thursday, September 7, 2017, at Pleasant Hill Cemetery with Rev. John Cunyus and Bruce Cunyus officiating. Interment will follow under the direction of Crawford-A. Crim Funeral Home. A visitation will be held on Wednesday, September 6, 2017, from 5PM to 7PM at Crawford - A. Crim Funeral Home. Mr. Hale passed away September 4, 2017, at Brookdale of Henderson. Mr. Hale was born on February 11, 1930, in Rusk County to the late Mr. Barney Hale and Opal (Hays) Hale. He served his country honorably as a member of the United States Army, and worked as a pumper for Hunt Oil Company. Rex was a proud Gaston Red Devil graduate, avid arrowhead hunter, fisherman, bird hunter and enjoyed spending time with friends at B & H Pump. Rex's favorite time was hosting fish fries, dove and quail feast at the "Out Back" in Joinerville . He was most proud of his family and the unconditional love & support that has been shared with each member. He was also a member of Cumberland Presbyterian Church. Preceding him in death were his parents, his wife, Ann Hale; great granddaughter, Josey Ballenger; brothers, Jack and J.B. Hale; and sisters, Mary McCarty and Jo Ann Kyle. Survivors include his sons, Brent Hale and wife Kathryn of Joinerville, and Kelly Hale and wife Tammy of Joinerville; daughters, Anita Cavaliere and husband Tony of Henderson, Lacy Weaver and husband Rusty of Henderson, and Claudia Bozich of Wylie; thirteen grandchildren, eleven great-grandchildren and one more Hale baby on the way, as well as many other friends and loved ones. The family requests that donations be made to the Gaston Museum at PO Box 301, Joinerville, TX 75658, the Brookdale Alzheimer's Team, 1000 Richardson Drive, Henderson, TX 75654. A special thanks is extended to Alice, Brenda, Mary, and Sabrina for their compassionate assistance and the Staff at Brookdale. . Words of comfort may be shared with the family at www.crawfordacrim.com.

Graveside services for Mr. Rex Hale, 87, of Henderson, will be held at 10AM on Thursday, September 7, 2017, at Pleasant Hill Cemetery with Rev. John Cunyus and Bruce Cunyus officiating. Interment will follow under the direction of Crawford-A.... View Obituary & Service Information

The family of Mr. Rex Hale created this Life Tributes page to make it easy to share your memories.

Graveside services for Mr. Rex Hale, 87, of Henderson, will be...