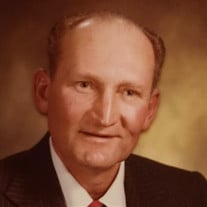 Graveside services for Mr. Reuben Jacob Brooks, 87, of Canton, will be held at 10AM on Wednesday, March 27, 2019 at Liberty Cemetery on CR 397 in Rusk County with Bro. Keith Blanton officiating. Interment under the direction of Crawford-A. Crim Funeral Home will follow. Visitation will be held from 5-7PM on Tuesday, March 26 at the funeral home. Mr. Brooks passed away at his home in Canton, Texas on March 23, 2019. RJ was born July 1, 1931 in the Liberty Community to Rube Brooks & Mattie Wilson Brooks. He graduated from Henderson High School in 1948 and attended East Texas Baptist College. He retired as a skilled instrument fitter for many companies over the US including, Hudson, Zachry, & Fluor. He served his country in the US Army during the Korean War. RJ was a member of the Tatum ISD school board from 1973-1980 and was the president for 7 years. He was a lay pastor for many local, rural communities. RJ loved the Lord and was an exceptional Biblical scholar. He was well-known for his outstanding gardens. He was preceded in death by parents; wife of 68 years, Helen; daughter, Jane; beloved sister, Joyce Carter, brother-in laws, A.B. Jr. & Henry Page. RJ is survived by daughter and son-in-law, Paige & Chris Sanders of Canton; granddaughter, Torri Sanders of Dallas; grandson, Chase Sanders of Canton; sisters Martha Gilliam of Bolivar, MO, & JoAnn TiIlison of Henderson. Sisters-in-law, Juanita Andrepont of Opelousas, LA, Maude Page & Marie Page of Lafayette, LA. Nieces and nephews include, Deborah Gagnon, Carl Smith, Sheri Parker & Ken Tillison. In lieu of flowers, the family requests donations to The Brooks Family Scholarship, Tatum Ex-Students Assoc, P.O. Box 975, Tatum, TX 75691. Words of comfort may be shared with the family at www.crawfordacrim.com.

Graveside services for Mr. Reuben Jacob Brooks, 87, of Canton, will be held at 10AM on Wednesday, March 27, 2019 at Liberty Cemetery on CR 397 in Rusk County with Bro. Keith Blanton officiating. Interment under the direction of Crawford-A. Crim... View Obituary & Service Information

The family of Mr. Reuben Jacob Brooks created this Life Tributes page to make it easy to share your memories.