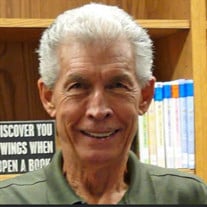 Mr. Ray Hartenstein, 87, of Laneville, passed away March 4, 2022, at UT Health in Tyler. He was born March 11, 1934 in Belleville, Illinois to Erwin K. and Viola (Huling) Hartenstein. Ray served his country in the United States Navy. He had a Bachelor's Degree in Electrical Engineering from the University of Maryland. Ray was an Aerospace Engineer for NASA for 30 years. He was a member of The Kiwanis Club of Henderson where he loved delivering books to children as well as reading those books to them. The Little One's Literacy Program held a special place in his heart. Ray also enjoyed growing trees on his tree farm and was a Master Tree Farmer through the Texas Forestry Service. He was a member of First Methodist Church of Nacogdoches and enjoyed singing in the Praise Band at church. He helped build houses for Habitat for Humanity all over the country and also volunteered for mission trips with the Baptist Men and Volunteer Christian Builders organizations. Ray performed in many musicals and dramas while in Maryland with the NASA Music and Drama Club. He enjoyed running long distance races. He ran in 23 marathons, which included four consecutive Boston Marathons, 5k and 10k races. He was preceded in death by his father, Erwin K. Hartenstein; mother, Viola (Huling) Hartenstein-Janney; brother, Douglas Hartenstein; sister, Viola "Rusty" Clements; and step-grandson, Connor Adams. Survivors include his wife of 34 years, Judy Hartenstein; sons, Larry Hartenstein, Phil Hartenstein, Chris Hartenstein, J.D. Hartenstein and wife Lena; daughter, Lynn Carter and husband Bob; step-son, Scott Adams; sister, Helen Laws-Wilson; brother, David Hartenstein; seven grandchildren, one great-grandchild, and a host of nieces, nephews, other family, and friends. In lieu of flowers, the family requests that donations be made to the Little Ones Literacy Program, P.O, Box 1206 Henderson, Texas, 75653 and to the Foundation for Peripheral Neuropathy, 485 E Half Day Rd Ste 350, Buffalo Grove, IL 60089-8808 A memorial visitation for Ray will be held from 5-7 p.m. on Saturday, April 9, 2022, at Crawford-A. Crim Funeral Home. Words of comfort may be shared with the family at www.crawfordacrim.com.

Mr. Ray Hartenstein, 87, of Laneville, passed away March 4, 2022, at UT Health in Tyler. He was born March 11, 1934 in Belleville, Illinois to Erwin K. and Viola (Huling) Hartenstein. Ray served his country in the United States Navy. He had... View Obituary & Service Information

The family of Mr. Ray Hartenstein created this Life Tributes page to make it easy to share your memories.