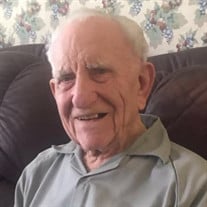 Funeral services for Mr. Prentis L. Irwin, 94, of Henderson, will be held at 3:00 p.m. on Friday, February 4, 2022, in the chapel at Crawford-A. Crim Funeral Home with Rev. Steve Fulton officiating. Interment will follow at Crims Chapel Cemetery under the direction of Crawford-A. Crim Funeral Home. The family will receive friends from 2:00 p.m. until service time on Friday, at the funeral home. Mr. Irwin passed from this life on February 1, 2022, at UT Health in Henderson. He was born December 22, 1927, in Longview to the late E.W. and Zula (Cain) Irwin and was a resident of Longview until 1963 when he moved to Henderson. Mr. Irwin served his country in the United States Army and went on to a long career with the United States Postal Service where he retired as Postmaster of the Laneville Post Office. Prentis loved to travel and ventured throughout the United States in his motorhome. He also enjoyed mowing and maintaining his yard. Mr. Irwin was a member of Providence Baptist Church in Crims Chapel. In addition to his parents, he was preceded in death by his first wife, Reba Irwin. Survivors include his wife of 27 years, Alma Irwin of Henderson; sons, Loyd Irwin and wife Debra of Henderson, and Danny Irwin of Gilmer; 3 grandchildren and 5 great-grandchildren; as well as a host of nieces, nephews, other family and friends. Pallbearers will be Kenneth Irwin, Dudley Holdeman, David Griffith, Derek Faulkner, Jackson Threadgill, and Sammy Roundtree. Honorary pallbearer will be Chris Threadgill. Words of comfort may be shared with the family at www.crawfordacrim.com.

The family of Mr. Prentis L. Irwin created this Life Tributes page to make it easy to share your memories.