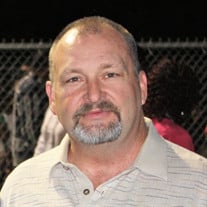 A Memorial Visitation for Mr. Phillip Osteen, 62, of Kilgore, will be held from 6:00-8:00 p.m., Friday, Jan. 5, 2018 at Crawford-A. Crim Funeral Home. Cremation arrangements are with Crawford-A. Crim Funeral Home of Henderson. Mr. Osteen passed away Tuesday, Jan. 2, 2018 in Burleson. He was born Oct. 24, 1955 in Pampa, TX to the late James Harold and Laquita Sue Osteen. He worked for Benchmark Consulting as an Industrial Safety Inspector, and was also a Master Welder, holding seven certifications. There was never a more giving man who took care of everyone he knew. Phillip loved to hunt and fish, and travelled with his wife all over the US. He loved his kids, and adored his grandchildren. In addition to his parents, he was preceded in death by his son, Jason Osteen; and brother, Mike Osteen. Survivors include: his wife of 35 years, Stephanie Osteen of Kilgore; children, Matt Osteen and wife Shaena of Henderson, Courtney Osteen of Kilgore, and Chance Osteen of Dallas; brother, Tom Osteen and wife Sandra of Henderson; nine grandchildren and one great-grandchild; and many, many nieces and nephews. Condolences may be made online at www.crawfordacrim.com.

The family of Mr. Phillip Osteen created this Life Tributes page to make it easy to share your memories.

A Memorial Visitation for Mr. Phillip Osteen, 62, of Kilgore,...