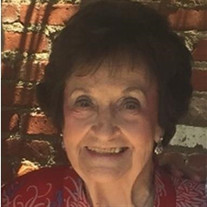 Graveside services for Mrs. Peggy Jo Hall Hopkins, 87, of Lake Highlands, formerly of Henderson, will be held at 3:00 p.m. on Thursday, January 11, 2018, at Lakewood Memorial Park. Interment will follow under the direction of Crawford-A. Crim Funeral Home. She was born on May 26, 1930 and entered the gates of Heaven on January 6, 2018. She was born in Houma, Louisiana to Willie and Annie Hall. They moved to Henderson, Texas where Peggy met her true love Bev M. Hopkins in high school. They both attended Kilgore Junior College where she was a Rangerette. Bev proposed to her after her freshman year. This began their adventurous life where they moved to Austin, Texas for Bev to complete his degree from University of Texas. They eventually settled in Dallas where they raised their two daughters, Lynda Jo Sawyer and Susan Kay Standifer. Peggy was independent and compassionate woman who treated everyone like they were “hers”. Whether it was serving as the President of the Lake Highlands PTO, Womens League, cheering on one of her 7 grandchildren or 14 great-grandchildren, driving her friends to lunch or having dinner with her nephew, she always served as a confidant and advisor. Her life lessons that she offered will continue to live on through her legacy. She was greeted in Heaven by her beloved Bev, daughters Lynda Jo and Susan, parents Willie and Annie, and her sister Nell Ray. The reunion that must have been! She will watch over her nephew David Velvin and wife Jo, niece Becky Jordan and husband Jim; son-in-law Wyatt Standifer; grandchildren Brad Sawyer and wife Shea, Blake Sawyer and wife Julie, Brett Sawyer and wife Tanessa, Sarah Standifer, Lindsay Anthony and husband John, Lance Standifer and Sheena, and Max Standifer; great grandchildren Graham Sawyer, Annalee, Caroline, Margaret and Joe Garrett Sawyer, Kinsley, Keira, Kamden and Khloe Sawyer, Elizabeth Fichtenbaum, Emily and Eli Anthony, Zion and Zoie Standifer. Condolences may be made online at www.crawfordacrim.com.

Graveside services for Mrs. Peggy Jo Hall Hopkins, 87, of Lake Highlands, formerly of Henderson, will be held at 3:00 p.m. on Thursday, January 11, 2018, at Lakewood Memorial Park. Interment will follow under the direction of Crawford-A. Crim... View Obituary & Service Information

The family of Mrs. Peggy Jo Hopkins created this Life Tributes page to make it easy to share your memories.