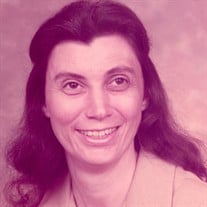 Graveside services for Mrs. Peggy Brightwell, 81, of Henderson, will be held at 2PM on Saturday, April 27, 2019, at Lakewood Memorial Park with Rev. Jimmy Simmons officiating. Interment will follow under the direction of Crawford - A. Crim Funeral Home. A visitation will be held on Friday, April 26, from 5-7PM at the funeral home. Peggy was born on November 8, 1937, in Cleburne, Texas to Gaither and Leona Rogers McElroy. She passed away on April 23, 2019, in Henderson, Texas, at the age of 81. She attended school in Tyler, and graduated from Tyler High School in 1955. In 1957, she wed Ralph Brightwell, and they were married for 46 years. He preceded her in death in 2003. Peggy was active in her children's lives. She served as a room mother for their school class, was President of the Montgomery P.T.A., and President of the Henderson High School Band Boosters. She was also a Cub Scout Den Leader and a Bluebird, as well as a Campfire Girls Leader, and a member of the Mary Tyler Chapter of the Daughters of the American Revolution. When her son got a paper route in 1974, she became involved with the Henderson Daily News, where she worked until she retired in 2017 at the age of 79. Preceding her in death were her parents; husband, Ralph Brightwell; and two brothers, William and Glenn McElroy. Survivors include her son, Tony Brightwell of Ft. Worth; daughter, Ramona White and husband Jim of Henderson; grandchildren, Corey Denison and husband Chris, and Chris White; as well as five great-grandchildren. In lieu of flowers, memorial contributions may be made to the charity of your choice. Words of comfort may be shared with the family at www.crawfordacrim.com.

Graveside services for Mrs. Peggy Brightwell, 81, of Henderson, will be held at 2PM on Saturday, April 27, 2019, at Lakewood Memorial Park with Rev. Jimmy Simmons officiating. Interment will follow under the direction of Crawford - A. Crim... View Obituary & Service Information

The family of Mrs. Peggy Brightwell created this Life Tributes page to make it easy to share your memories.