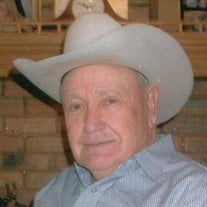 Funeral services for Mr. Paul Smith, 84, of Tatum, will be held at 2:00 p.m. on Tuesday, August 10, 2021, in the chapel at Crawford-A. Crim Funeral Home with Jason Taylor officiating. Interment will follow at Harris Chapel Cemetery under the direction of Crawford-A. Crim Funeral Home. The family will receive friends from 1:00 p.m. until service time on Tuesday, August 10, at the funeral home. Mr. Smith passed from this life on August 6, 2021, at his residence. He was born June 8, 1937, in Henderson to the late Elmer and Marian (Harmon) Smith. Paul was raised in Henderson and attended Henderson schools before moving to Tatum some time after graduation. He attended Kilgore College and later roughnecked after his time at KC. He was the owner and operator of Paul Smith Trucking and was also a buyer for Van and Roach Cattle Company. Paul also raised cattle of his own and enjoyed being a rodeo cowboy. In 2011, he was given the honor of being inducted into the Texas Rodeo Cowboy Hall of Fame in Ft. Worth. After his retirement, Mr. Smith served Tatum and Rusk County as Constable for Precinct 2 for 12 years. He was also a member of Bar None Cowboy Church. In addition to his parents, he was preceded in death by his brothers, Ken Smith and David Smith. Survivors include his children, Danny Smith and wife Debi, and Paula Bishop and husband Jimmy, all of Tatum; a special friend who was more like a daughter, Deon Clifton, also of Tatum; as well as a host of nieces, nephews, other family, and friends. Words of comfort may be shared with the family at www.crawfordacrim.com.

Funeral services for Mr. Paul Smith, 84, of Tatum, will be held at 2:00 p.m. on Tuesday, August 10, 2021, in the chapel at Crawford-A. Crim Funeral Home with Jason Taylor officiating. Interment will follow at Harris Chapel Cemetery under the... View Obituary & Service Information

The family of Mr. Paul Smith created this Life Tributes page to make it easy to share your memories.