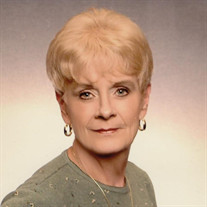 Pat Glover (80) of Kilgore went to be with the Lord on August 7, 2021. Born November 14, 1940 in Borger, Texas, she was preceded in death by her parents Charles and Francis Herrmann, brother Willie Herrmann and husband, W.S. “Bill” Glover all of whom she tended to during their illnesses. Even though she was stricken with cancer twice following the loss of her loved ones she had a strong will to live and love for life no matter the many hardships that came along. Pat was one of those people that took the hardships of life with a positive attitude and never complained. She loved hunting and fishing with her son Carl, playing shuffleboard with her friends and playing the piano for the Lord! She served as pianist at Moberly Baptist Church in Longview in 1966, and later in the ‘70s and ‘80s. She also played the piano for Trinity and Eastside Baptist churches in Henderson. She was a member of the Henderson Chapter 597 of the Order of the Eastern Star. Known to many as “Miss Pat” she had friends in many places. After the death of her husband she bought a shuffle board and began hosting long-running tournaments around town. She would tabulate all the year’s winners and organized trophies for them all. She started a cottage business making hot sauce known as Miss Pat’s Hot Sauce. If you knew her well enough, she would sell you a jar or two and if you liked it a certain way she would whip you up a batch tailored to your liking. Pat was raised in Borger Texas and Albuquerque New Mexico. She attended The University of New Mexico and had a tenured career at Anderson Hickey in Henderson. She is survived by her son Michael Johnston of Houston, daughter Pamela Teel of Cypress and son Carl Harmonson and wife Jeanna of Henderson. She had four wonderful grandchildren, Conran Teel, Kaley Harmonson and Jeffrey Harmonson and Cathryn Pitts and spouse Dylan Pitts and great grandson Jasper Pitts of Carthage. She also leaves behind stepson Wayne Glover and wife Jackie of Lake Worth, and step-grandchildren Kenneth and Tara Glover. Funeral services for Mrs. Glover will be held at 2:00 p.m. on Thursday, August 12, 2021, in the chapel at Crawford-A. Crim with Jason Taylor officiating. Interment will follow at Oak Hill Cemetery under the direction of Crawford-A. Crim Funeral Home. The family will receive friends from 1:00 p.m. until service time on Thursday, at the funeral home. Pallbearers will be Conran Teel, Jeffrey Harmonson, Ricky Baker, Neill Duran, David Cates, and Keith Bassett. In lieu of flowers, memorial donations may be made to the American Cancer Society at P.O. Box 22478, Oklahoma City, OK 73123. Words of comfort may be shared with the family at www.crawfordacrim.com.

The family of Mrs. Patricia Glover created this Life Tributes page to make it easy to share your memories.

Pat Glover (80) of Kilgore went to be with the Lord on August...