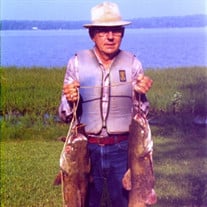 Private family graveside services for Mr. Oscar Courtright, 86, of Henderson, will be at 10:00 a.m., Friday, Dec. 28, 2018 at Rusk County Memorial Gardens with Rev. Dwain Knight officiating. Interment will follow under the direction of Crawford - A. Crim Funeral Home of Henderson. Visitation will be from 5:00 - 7:00 p.m., Thursday, Dec. 27, 2018 at the funeral home. Mr. Courtright passed away Saturday, Dec. 22, 2018 at his residence. He was born May 28, 1932 in Anadarko, OK to Mr. W. F. and Mrs. Maude Courtright. Oscar's father, W. F. Courtright, died in 1937, and Mrs. Courtright married N. L. Williams of Temple, OK in 1942. Oscar graduated from Temple High School in Oklahoma, and was president of his freshman and junior classes. He also served in the US Army and was honorably discharged in Dec. 1954. He met his wife Betty J. (Mason) Courtright in Hobbs, NM and they were married Aug. 27, 1952. Betty died on Sept. 8, 2015, after over 63 years of marriage. Oscar worked in the oil fields of the Western states for 35 years, from Texas to North Dakota testing oil and gas wells. After his retirement, Betty and Oscar moved to Henderson to spend their remaining years. In addition to his wife and parents, he was preceded in death by his brother, Jackie Courtright, and half-sister, Jeannie Trahan. Survivors include; son, Mason Courtright of Casper, WY, daughter, Anja Joyce and husband Kenton of Conroe; sister, Wylma Langford and husband Orvil of Seminole, TX; and half-brothers, Merle and Robert Williams of Dallas, TX. Condolences may be made at www.crawfordacrim.com.

The family of Mr. Oscar Courtright created this Life Tributes page to make it easy to share your memories.