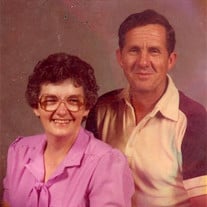 Memorial services for Mrs. Ola Mae Spradlin, 84, of Henderson, will be at 2:00 p.m., Saturday, Sept. 2, 2017 at Crawford-A. Crim Funeral Home chapel with Jason Taylor officiating. She passed away Wednesday, August 30, 2017 at a local nursing home. Family will receive friends from 1:00-2:00 p.m., Saturday, Sept. 2, 2017 one hour before the service. Mrs. Spradlin was born on August 20, 1933 in South Fork, Arkansas to the late Mr. Wiley Pugh and Eunice (Dillard) Pugh. She was known as the "Pie Lady", working with restaurants such as the Star Café and Hushpuppies. She was also a member of Bar None Cowboy Church. She was preceded in death by her parents, her husband, Bert Spradlin; son, Mike Spradlin; brother, Louis Pugh; and sister, Norma Lee Wehunt. Survivors include her daughters; Brenda Thompson and husband Jeff of Henderson, and Mary Beth Smith of Longview; brother, Robert Pugh of California; grandchildren, Randi Thompson Geiger and husband Wesley of Dallas, Traci Thompson of Carthage, Brandon Smith and wife Stephanie of Henderson, Lucy Harmon and husband Marshall of Henderson; four great grandchildren, as well as a host of other friends, family, and loved ones. Condolences may be made online at www.crawfordacrim.com.

The family of Mrs. Ola Mae Spradlin created this Life Tributes page to make it easy to share your memories.