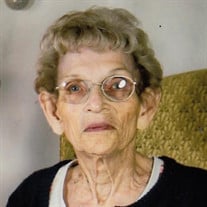 Funeral services for Ms. Norma Jean Allred Repp, 93, of Henderson, will be held at 11:00 a.m., on Wednesday, March 9, 2022 at Crawford-A. Crim Funeral Home chapel with Bro. Bill Aven officiating. Interment will follow at Zion Hill Cemetery under the direction of Crawford-A. Crim Funeral Home of Henderson. The family will receive friends from 10:00 a.m. until service time on Wednesday, March 9, 2022 at the funeral home. Ms. Repp passed from this life on Sunday, March 6, 2022 at UT Health Henderson. She was born on April 27, 1928 to the late Curtis and Kate Jennings Allred. Ms. Repp was a loving mother and “Mamaw” to her grandchildren and great-grandchildren. She was also a member of the West Main Baptist Church of Henderson. In addition to her parents, she was preceded in death by the father of her children, Jack Repp; one brother, Hubert Allred; three sisters, Velma Dawson, Mary Husband, and Virginia Rousseau; and grandson, Lance Prior. Survivors include her daughters, Connie Repp Merritt of Baton Rouge, LA, and Margaret Repp Prior and husband Jerry of Pinehill, TX; grandchildren, Jeremy Merritt, Lacy Merritt, Jordan Merritt, all of Baton Rouge, LA, and Alicia Prior Copeland of Henderson; 19 great-grandchildren; special niece and her husband, Martha and Jerry Melton of Henderson; and a host of nieces, nephews, family, and friends. In lieu of flowers, memorial donations may be made to the Zion Hill Cemetery, P.O. Box 217 Henderson, TX 75653. Words of comfort may be shared with the family at www.crawfordacrim.com.

The family of Ms. Norma Jean Allred Repp created this Life Tributes page to make it easy to share your memories.