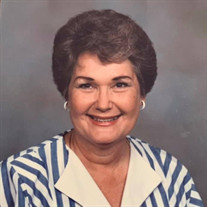 Nola Joyce Faulkner, 86, died February 6, 2021 at Brookdale Senior Living in Henderson, TX. A Celebration of Life will be held at 2:00 pm, Thursday, February 11, 2021 at Crawford - A. Crim Funeral Home, 1414 South Main St. in Henderson, Texas with Chaplain Robert Carter officiating. Visitation for family and friends will be held from 1:00 pm until service time. Interment will follow at Lakewood Memorial Park in Henderson, Texas. Mrs. Faulkner was born March 21, 1934 in Henderson, TX to Thomas and Flora Davis. She met the love of her life, Delbert Felton Lee in Henderson. They were married on September 7, 1950 and began their life together. She was a homemaker and served as a librarian for the Rusk County Library for many years. Joyce and Delbert had three sons and loved being surrounded by family. Her hobbies included sewing, reading, drawing, painting, writing poetry, volunteering at her church, traveling, and spending time with grandkids. Throughout East Texas she painted several church baptistry scenes. Joyce was a charter member of Southside Baptist Church. She professed her faith in the Lord Jesus Christ on November 11, 1944 when she was 10 years old. Following the example of Jesus her Lord and Savior, she was baptized at First Baptist Church, Henderson, Texas because Southside did not have a baptistry at the time. Joyce was married to Delbert Lee from 1950 to until his death in 1975. She married Robert Taliaferro in 1976 and they were married until Robert died in 1990. She married Vernon Wayne Faulkner in 1993 and they were married until his death in 2012. Mrs. Faulkner was preceded in death by her three husbands, Delbert, Robert, and Vernon; her sisters, Martiel Adams and Tommie Nell Collins, her brother, Glenn Ray Davis, and by her parents, Thomas and Flora Davis. She is survived by three sons, Richard Felton Lee and wife Claudia of Henderson, TX, Larry Dale Lee and wife Brenda of Orange, TX, and Donald Mac Lee and wife Patty of Shreveport, LA; nine grandchildren, Lisa Campbell, Richard Lee, Valerie Adams, Laurie Burke, Thomas Lee, Luke Lee Melody Rogers, Tracy Dowling, and Stacy Thornton; 22 great-grandchildren; and 15 great-great-grandchildren; two sisters, Maxine Billingsly and husband Clyde of Moultrie, Georgia, Maudine Adams of Mt. Enterprise, TX; and several cousins and close friends. Those desiring to do so may make memorial contributions in Mrs. Faulkner's name to the charity of their choice. Words of comfort may be shared with the family at www.crawfordacrim.com.

The family of Mrs. Nola Joyce Faulkner created this Life Tributes page to make it easy to share your memories.