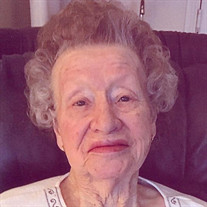 Graveside services for Mrs. Neoma Russo, 91, of Henderson, formerly of Longview, will be held at 2:00 p.m. on Friday, May 19, 2017, at Rusk County Memorial Gardens with Rev. Steve Butler officiating. Interment will follow under the direction of Crawford-A. Crim Funeral Home. The family will receive friends from 6-7 p.m. on Thursday, May 18, at the funeral home. Mrs. Russo passed from this life on May 16, 2017, at Brookdale of Henderson. She was born March 8, 1926, in Delaware, Arkansas to the late Luther and Mary (Farham) Jones. Mrs. Russo was a homemaker and a member of First United Methodist Church. In addition to her parents, she was preceded in death by: husband, Joe Russo; son, Randy Russo; sisters, Lorene Bunch, Mae Peperant, Robbie Anderson, and Modene James; and brother, Dorman Jones. Survivors include: daughters, Susan Lingle and husband Fred and Karen Hurt and husband Cliff, all of Henderson; sister, Geneva Marshall of Bentonville, Arkansas; grandchildren, Kasi Maddox and husband Chris of Henderson, Lindsey Mochel and husband John of McKinney, and Reid Hurt and wife Magui of Katy; and eight great-grandchildren. Pallbearers will be Cliff Hurt, Reid Hurt, John Mochel, Fred Lingle, Douglas Lingle, and Chris Maddox. Honorary pallbearers will be Laverne Gibson and Braxton Miller. The family would like to say a special word of thanks to the staffs at Brookdale of Henderson and Angel Care Hospice for their loving care of Mrs. Russo. In lieu of flowers, memorial donations may be made to Angel Care Hospice at 702 Fair Park Dr., Ste 102, Henderson, TX 75654. Words of comfort may be shared with the family at www.crawfordacrim.com.

Graveside services for Mrs. Neoma Russo, 91, of Henderson, formerly of Longview, will be held at 2:00 p.m. on Friday, May 19, 2017, at Rusk County Memorial Gardens with Rev. Steve Butler officiating. Interment will follow under the direction... View Obituary & Service Information

The family of Mrs. Neoma Russo created this Life Tributes page to make it easy to share your memories.