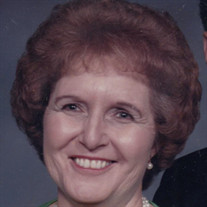 Funeral services for Mrs. Nelwyn Whitehead Hughes, 93, of Kirvin, will be held at 11:00 a.m. on Tuesday, January 11, 2022, in the chapel at Crawford-A. Crim Funeral Home with Rev. Dwain Knight officiating. Interment will follow at Laneville Cemetery under the direction of Crawford-A. Crim Funeral Home. The family will receive friends from 10:00 a.m. until service time on Tuesday, at the funeral home. Mrs. Hughes passed from this life on January 8, 2022, at her home in Kirvin. She was born April 25, 1928, in Minden to the late Arthur and Florence (Rousseau) Whitehead and grew up attending Minden Schools. She later worked for Mina's Dress Shop in Angleton for 25 years before spending the last 38 years in Kirvin. Nelwyn enjoyed working with flowers and potted plants, and she was very close to her brothers and sister and enjoyed getting together with them several times a year. Family was important to Mrs. Hughes and she loved her family, especially her great-grandchildren. Mrs. Hughes was also a long-time member of Kirvin Baptist Church. In addition to her parents, she was preceded in death by her first husband, Ray Irby; brothers, Alfred (Edell) Whitehead, Gay Whitehead, and Roger Whitehead; brother-in-law, Teddy Smith; and sisters-in-law, Eugenia Whitehead, Maude Ellen Whitehead, Mary Whitehead, and Inell Whitehead. Survivors include her husband of 53 years, Harry Hughes of Kirvin; children, Julie Kolojaco of Richmond, Vicki Fisher and husband Don of Rice, Bill Irby and wife Vicki of Canyon Lake, Jill Brown and husband Bob of Fulshear, and Jack Hughes of Vancouver, Washington; sister, Marilyn Smith of Pine Hill; brother, Worth Whitehead of Henderson; sister-in-law, Mary Jo Whitehead; 12 grandchildren and 17 great-grandchildren; as well as a host of nieces, nephews, other family and friends. Pallbearers will be Cole Irby, Stacy Slawinski, Joseph Reue, Greg Johnson, Danny Ramirez, and Michael Guthrie. In lieu of flowers, memorial donations may be made to Community Health Care of Texas at 312 South Hwy 14, Mexia, TX 76667. Words of comfort may be shared with the family at www.crawfordacrim.com.

Funeral services for Mrs. Nelwyn Whitehead Hughes, 93, of Kirvin, will be held at 11:00 a.m. on Tuesday, January 11, 2022, in the chapel at Crawford-A. Crim Funeral Home with Rev. Dwain Knight officiating. Interment will follow at Laneville... View Obituary & Service Information

The family of Mrs. Nelwyn Whitehead Hughes created this Life Tributes page to make it easy to share your memories.