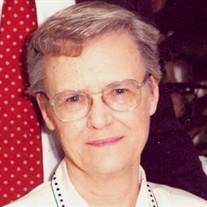 Nancy Marion (Mamie) Rousseau Grant, 92, of Henderson, passed away on November 7, 2017 in Carthage. She was born December 4, 1924 in Rusk County. Preceding her in death were her husband, Lawrence Monroe Grant; her parents, John Hall Rousseau and Martha Elizabeth Jones Rousseau; and her sister, Joyce Rousseau Maples. She is survived by her brother David Rousseau (Sherry) of Henderson; her children, Larry Grant (Valerie) of Linden, Alabama; Judy Love (Rick) of Little Rock, Arkansas; and Joe Grant (Patricia) of Maumelle, Arkansas; 10 grandchildren and 5 great-grandchildren. Mrs. Grant grew up in Woodglen Community and graduated from Minden High School as Salutatorian. Marion worked as one of the "Rosie the Riveter" production workers for Hughes Tool in Houston during WWII, where she also met her future husband. When she and Monroe moved to Texarkana, she worked as a homemaker until her youngest child started school, at which time she entered Texarkana College. She spent many years working as a bookkeeper for Porter-McClure Company in Texarkana before retiring. Upon her husband's death she returned to her original home place in Woodglen Community. She loved reading, especially the Bible, and taught Sunday School for many years at Central Baptist Church in Texarkana. She was also a prolific writer and spent some of her later years writing her memoirs as a gift to her children. At the time of her death she was a member of Zion Hill Missionary Baptist Church, the church of her youth. Visitation will be from 9:00-10:00 a.m., Friday, November 10, 2017 at Crawford-A. Crim Funeral Home of Henderson, with funeral services following at 10:00 a.m with Bro. Jimmy Simmons officiating. A graveside committal service will be held the same day at 2:00 p.m. at East Memorial Gardens in Texarkana, Arkansas. The family would like to thank the staffs of Carthage Health Care and Angel Care Hospice for the loving care shown to our mother. In lieu of flowers, memorials may be made to Samaritan's Purse/Clean Water online at https://www.samaritanspurse.org/donation-items/clean-water/ or by mail to Samaritan's Purse/Clean Water, P.O. Box 3000, Boone, NC 28607; or to Angel Care Hospice, 702 Fairpark Dr. Suite 102, Henderson, TX 75654. Condolences may be made online at www.crawfordacrim.com.

Nancy Marion (Mamie) Rousseau Grant, 92, of Henderson, passed away on November 7, 2017 in Carthage. She was born December 4, 1924 in Rusk County. Preceding her in death were her husband, Lawrence Monroe Grant; her parents, John Hall Rousseau... View Obituary & Service Information

The family of Mrs. Nancy Marion (Mamie) Rousseau Grant created this Life Tributes page to make it easy to share your memories.