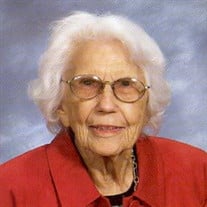 Memorial Services for Nancy Johnson Preston will be held at 4 p.m. on Wednesday, April 26, 2017, at the First United Methodist Church with the Reverends David Luckert and Debbie Tipps officiating under the direction of Crawford-A. Crim Funeral Home. A reception for family and friends will be held in the church parlor immediately after the service. Honorary Pall Bearers will be members of the Board of Directors of Henderson Federal Savings Bank, and family friends: David Alford, Monty Bonner and Jon Johnston. Mrs. Preston died in Henderson on Sunday, April 23, 2017, after a stroke several days earlier, and after celebrating her 99th birthday also a few days earlier. She was born on April 15, 1918, in Laneville to Charles E. Johnson and Jessie Vandigriff Johnson. She graduated from Henderson High School in 1935 and then attended Texas Woman's University in Denton where she graduated with a Bachelor's Degree in Education in 1939. Her teaching career began in the public schools of the small rural community of Newton, Texas, as an elementary classroom teacher, but she returned to Henderson the following year to join the staff at Central Elementary in the Henderson ISD. Years later she told family members that she returned to Henderson to be closer to family and friends and to avoid the walk to her classroom in Newton along unpaved community streets often filled with cows, pigs, goats, and barking dogs. Nancy loved, inspired, and captivated first grade students with her bright smile, sparkling eyes, and energetic spirit. She taught for two years and was later quite pleased when a student in each of her classes graduated from Henderson High as valedictorian of their respective classes. In the spring of 1942 she left the classroom and traveled to San Francisco, California to marry her high school sweetheart, William A. (Billy) Preston on March 14, 1942, in the Methodist Church in San Vallejo. Billy had enlisted in the U.S. Army prior to the start of WW II and was stationed in California learning to fly hot air observatory balloons. Soon he was ordered to Hawaii and Nancy returned to her parents' home in Henderson. While in Hawaii Billy applied for Officer Candidate School and was accepted. He attended Officer Candidate School in Florida and upon graduation was commissioned as an officer in the Air Force. Then he was assigned to a base in Decatur, Alabama where he provided ground training to future pilots. Nancy was able to join him, and they remained in Alabama until the end of the war. Throughout her life Nancy enjoyed visiting with family and friends. She was a gracious hostess who loved to give and attend parties and social events. She wanted everyone, including herself, to have a very good time. During a marriage of 63 years she supported her husband in his many business and civic commitments. Nancy and Billy liked to travel and took many trips throughout the U.S. and to Europe with other couples from Henderson who were lifelong friends. Another of her favorite activities for decades was a weekly session of the table game Mah Jongg with a close group of women. Mrs. Preston always enjoyed their time together and she especially liked the sessions when she won frequently. She was a member of the First United Methodist Church in Henderson and attended the PALS Sunday School class. The kindness and caring of the PALS members meant much to her during the last months of her life. She was a long time member of the Henderson Varied Arts Club and the Henderson Woman's Forum. Survivors are two sons, Charles W. (Bill) Preston and wife, Nancy, of Henderson, and Edward A. (Ned) Preston and spouse, Ben Smith, of Washington, D.C.; two granddaughters, Sarah Merrill and husband, Greg, of Flower Mound, Texas, and Elisabeth McHugh and husband, Gregg, of Dallas; and four great grandchildren, Hannah Merrill, and Will, John, and Gus McHugh; and several cousins, nieces and nephews. The family extends a special thanks to a wonderful group of ladies who served as caregivers during the last years of her life: Ivenell Hart, Lois Windom, Latanya Mosley, Annette Scott, Teresa Strong, Tina Owens, and Rita Davis. The family also wishes to acknowledge and give thanks for the professional and compassionate care provided by the doctors, nurses and staff of ETMC-Henderson Hospital, Advancing At Home Health Care, Autumn Leaves Nursing and Rehab, and Angel Care Hospice. Memorials may be made to the First United Methodist Church, 204 North Marshall, Henderson, TX 75652; the Henderson ISD Education Foundation, P. O. Box 728, Henderson, TX 75653; or to the charity of one's choice. Words of comfort may be shared with the family at www.crawfordacrim.com.

Memorial Services for Nancy Johnson Preston will be held at 4 p.m. on Wednesday, April 26, 2017, at the First United Methodist Church with the Reverends David Luckert and Debbie Tipps officiating under the direction of Crawford-A. Crim Funeral... View Obituary & Service Information

The family of Mrs. Nancy J. Preston created this Life Tributes page to make it easy to share your memories.

Memorial Services for Nancy Johnson Preston will be held at 4...