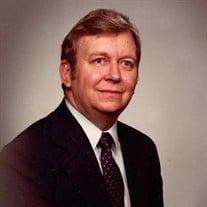 Funeral services for Mr. Hollis Baldree, 88, of Whitehouse, will be at 11:00 a.m., Tuesday, March 3, 2020 at Crawford - A. Crim Funeral Home chapel with Brother Bennie Portwood officiating. Interment will follow at Duncan Cemetery under the direction of Crawford - A. Crim Funeral Home of Henderson. Family will receive friends one hour before the service at the funeral home. Hollis was born Feb. 6, 1932 in the Tebo community of Sabine County, Texas to the late William Lee and Leola Lemons Baldree. He passed into glory on Feb. 22, 2020 in Tyler. In addition to his parents, he was preceded in death by his wife of 60 years, Yvonne Hammett Baldree; sister, Yvonne Trumps, and brother, Milton Baldree. He is survived by his children, Bill and Mary Baldree of Tyler, and Mike and Pam Baldree of Whitehouse; four grandchildren, Dusty Baldree of Calgary, Canada, Corey Shaw of Tyler, Megan Baldree of Whitehouse, and Robert Baldree of San Antonio; also five great grandchildren; sister, Joye Smith and husband Ronnie of Lufkin; brother-in-law, Don Trumps of Tyler, and numerous nieces and nephews. Hollis was a veteran of the Korean War, where he served with distinction, and was a graduate of the University of Texas in 1962, receiving his BBA. He retired from General Electric/Trane as a Master Scheduler, having worked there for 32 years. Hollis also was active in community service as both a school board and city council member in Troup. Hollis was a member of Gateway Baptist Church in Whitehouse. The family would like to express sincere appreciation to all the caregivers and staff at Prestige Estates Memory Care in Tyler, especially for all of their love and care during his stay. In lieu of flowers, donations are requested to the Alzheimer's Alliance of Smith County, 211 Winchester Dr., Tyler, TX 75701. Pallbearers are Corey Shaw, Dusty Baldree, Robert Baldree, Wesley Baldree, Kent Smith, and Andy Smith. Honorary pallbearer is Don Trumps. Condolences may be made at www.crawfordacrim.com.

Funeral services for Mr. Hollis Baldree, 88, of Whitehouse, will be at 11:00 a.m., Tuesday, March 3, 2020 at Crawford - A. Crim Funeral Home chapel with Brother Bennie Portwood officiating. Interment will follow at Duncan Cemetery under the... View Obituary & Service Information

The family of Mr. Myrthal Hollis Baldree created this Life Tributes page to make it easy to share your memories.

Funeral services for Mr. Hollis Baldree, 88, of Whitehouse, will...