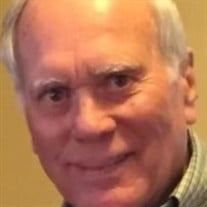 Funeral services for Mr. Michael R. Crye, 86, of Allen, formerly of Henderson, will be held at 2:00 p.m., Thursday, December 30, 2021 in the chapel at Crawford-A. Crim Funeral Home with Rev. Jeremy Roberts officiating. Interment will follow at Rusk County Memorial Gardens under the direction of Crawford- A. Crim Funeral Home of Henderson. Visitation will be from 1:00 - 2:00 p.m., Thursday, December 30, 2021 at the funeral home. Mr. Crye passed from this life peacefully on December 23, 2021 at his home in Allen, Texas. He was born on March 30, 1935 to the late Carmel Crye and Trebie Crye. Mike graduated from Gaston High School in 1954. He served in the United States Army and was stationed in Germany. In 1966, he married the love of his life, Liz (Ellis) Crye. Mike retired from Alcatel Technology where he was a draftsman. Mike was also an avid private pilot during his life. Flying and snow skiing were his hobbies. Above all he was a devout Christian who loved the Lord. He is preceded in death by his parents, and by his bother Leonard Crye. Survivors include: his wife, Elizabeth “Liz” Crye, of Allen, his brother Charles Crye, sister Evelyn Peacock, sister-in-law and husband Faye and Ken Modglin; sister-in-law, Lana Ellis; and nieces and nephews. Pallbearers will be Steve Crye, Jeff Crye, Todd Ellis, Ray Parrott, Paul Parrott, John Kocher and Brock Burkett. Honorary pallbearers are Joe Parrott, Nolan Harist, and the Gaston Class of 1954. If you would like to make a donation in his name, please make it to your favorite charity. Words of comfort may be shared with the family at www.crawfordacrim.com.

The family of Mr. Michael R. Crye created this Life Tributes page to make it easy to share your memories.