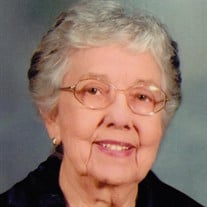 Mary Ellen Peacock Lowe passed away on Wednesday, December 15, 2021 in Fort Worth, Texas at the age of 94. Funeral service will be at 11:00 a.m., Saturday, December 18, 2021 at Crawford - A. Crim Funeral Home chapel with Rev. Shawn Heatherly officiating. Visitation will be at 10:00 a.m., one hour before the service. Interment will follow at Glenfawn Cemetery under the direction of Crawford - A. Crim Funeral Home of Henderson. Mary Lowe was born September 3, 1927 in Center, Texas to the late John and Lillian Peacock. Mary was two months old at the passing of her father. Several years later, her mother married L.P. Hatton, who was a loving and kind stepfather to Mary. She grew up in Center and graduated from Center High School in 1944. She graduated from Stephen F. Austin University, where she received her bachelor and master's degrees in Elementary Education. While attending college, Mary married her love, Joe W. Lowe, Jr. Mary was a first-grade teacher in Henderson, a second-grade teacher in Tyler, and later, after moving back to the family farm, taught in Laneville. Mary was a teacher of young children for 27 years. After many years at the farm, Joe and Mary moved back to Henderson. They continued to travel and entertain, and enjoyed wonderful trips to see family in Idaho and New York. The last few years, Mary lived in Fort Worth close to her daughter and family. Mary's heart was with her husband of 64 years, her family, and her church family. She was active at St. Paul's United Methodist Church, serving on many committees. Mary was known as "Nana" to her grandchildren and great-grandchildren. Her legacy of faith and family, and her unconditional love will be greatly missed by those whose lives she shared and touched. In addition to her parents, Mary was preceded in death by her husband, Joe; sisters, Amy Bailey, Vera Andrews, Zelda Bass, Betty Arnold, and Johnnie Reich, and two young brothers, Aubrey and Iree Peacock. Survivors include: son, Joe Lowe and wife Wendy of Loveland, Colorado; daughter, Kay Keith and husband Tom of Fort Worth; grandchildren, Tim Keith and wife Kari of Fort Worth, Suzanne Cohen and husband Adam of New York City, NY, Nathan Lowe of Loveland, Colorado; five beautiful great-grandchildren, Garrett and Taylor Keith of Fort Worth, and Marc, Harper, and Harlow Cohen of New York City, NY. Mary is also survived by many loving nieces and nephews. The family would like to express its sincerest appreciation to the dedicated staff of Trinity Terrace, 2nd floor Health and Rehabilitation Center, and to the Three Oaks Hospice. Also, the church family of St. Paul's and a special thanks to dear relatives, friends, and neighbors who gave so much love and support through the years. In lieu of flowers, the family would like to requests that donations be made to St. Paul's United Methodist Church on Highway 79 South to: P.O. Box 1226, Henderson, TX 75653, or to the charity of your choice. Condolences may be made at www.crawfordacrim.com.

Mary Ellen Peacock Lowe passed away on Wednesday, December 15, 2021 in Fort Worth, Texas at the age of 94. Funeral service will be at 11:00 a.m., Saturday, December 18, 2021 at Crawford - A. Crim Funeral Home chapel with Rev. Shawn Heatherly... View Obituary & Service Information

The family of Mary Ellen Lowe created this Life Tributes page to make it easy to share your memories.