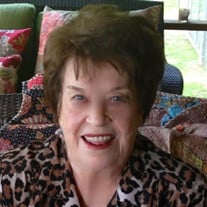 Funeral services for Mrs. Mary Ann Broome Duran, 89, of Henderson, will be held at 2:00 p.m. on New Year’s Day, Wednesday, January 1, 2020, at the Crawford-A. Crim Funeral Home Chapel in Henderson, with Rev. Randy Sceroler officiating. Interment will follow at Lakewood Memorial Park in Henderson under the direction of Crawford-A. Crim Funeral Home. The family will receive friends one hour prior to the service at the funeral home. Mrs. Duran passed away peacefully when being called by her Lord and Savior Jesus Christ during the afternoon of Sunday, December 29, 2019, at Christus Trinity Mother Frances Hospital in Tyler. Mary Ann Broome Duran was born on August 28, 1930, in Henderson, and was a lifelong resident and servant to the citizens of Rusk County, working in various roles at the Rusk County Courthouse for 48 years. While raising her three children, she found time on weekends to serve her Lord as a member of the Crim Gospel Singers. She was an active member of Hillview Baptist Church of Henderson and was loved by all of her church family. She touched everyone she knew with her kindness, her love, and her beautiful smile. She was a loving, caring, tireless mother while raising her children, and a devoted supporter of her grandchildren, who will be missed by all of her loving family and friends surviving her passing. Mrs. Duran is survived by her three children: Joseph Scott Duran of Henderson, Troy Neill Duran of Henderson, and Melanie Ann Duran Stanley and her husband Phillip Glen Stanley of Henderson. She is also survived by four grandchildren: Shelby Diane Duran Leath and her husband, Tyler Leath, of Dallas, Troy Jack Duran of Longview, Jagar Neill Duran of Longview, and Addison Ann Stanley of Henderson, as well as one sister-in law, Mary Harris Broome of Longview, and one niece, Stacey Broome Sword of Bullard, along with numerous other extended family members and friends. Mrs. Duran was preceded in death by her parents, Sam Broome and Mamie Broome Caldwell; two brothers, Arnim Broome and his wife, Frances, and Eugene (Sonny) Broome; and one sister, Sybil Louise Williams. Pallbearers will be Troy Duran, Jagar Duran, Tyler Leath, Phil Stanley, Randy Cooper, and Tim Storer. In lieu of flowers, donations may be made to the Ladies’ Ministry at Hillview Baptist Church of Henderson (PO Box 565, Henderson, TX 75653), of which Mrs. Duran was a strong supporter. Words of comfort may be shared with the family at www.crawfordacrim.com.

The family of Mrs. Mary Ann Broome Duran created this Life Tributes page to make it easy to share your memories.