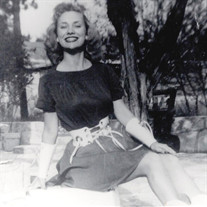 Mrs. Marty McDonald, 83, of Good Springs, passed from this life on February 4, 2020, at her residence. She was born January 21, 1937, in Henderson to the late Wilbur and Ruth (Williams) Smith and was raised in the Millville Community. Marty graduated from Henderson High School and went on to obtain a Bachelor's degree in English and History and a Master's degree in History from Stephen F. Austin State University. Marty also did post graduate work at Texas A & M and was in the first class of women at the university. Mrs. McDonald had a long career in public education that began in the Leverett's Chapel Independent School District, continued with Henderson I.S.D., and later Region 7 as an Education Specialist. Marty was a member of Beta Sigma Phi, and she loved to travel. She also was involved with the Henderson Women's Forum and was a former member of the board for Henderson Civic Theatre. Mrs. McDonald was an active member of First United Methodist Church where she also taught Sunday School. In addition to her parents, she was preceded in death by her father and mother-in-law who were second parents to Marty, Guy and Theo McDonald; husband, George (Vernon) McDonald; sister, Ginny Webster; and brother, Jack Smith. Survivors include her daughter, Malinda McDonald of Good Springs; son, Garry V. McDonald, Ph.D. of Fayetteville, Arkansas; grandson, Macdonald "Mac" Norman, J.D., LL.M. of Washington, D.C.; sister-in-law, Joan Smith of Henderson; and a host of nieces, nephews, other family and friends. A visitation to celebrate Mrs. McDonald's life will be held from 5-7 p.m. on Thursday, February 6, 2020, at Crawford-A. Crim Funeral Home. In lieu of flowers, memorial donations may be made to the Syrup Team at the Rusk County Depot Museum at 514 N. High St., Henderson, TX 75652. Words of comfort may be shared with the family at www.crawfordacrim.com.

Mrs. Marty McDonald, 83, of Good Springs, passed from this life on February 4, 2020, at her residence. She was born January 21, 1937, in Henderson to the late Wilbur and Ruth (Williams) Smith and was raised in the Millville Community. Marty... View Obituary & Service Information

The family of Mrs. Marty McDonald created this Life Tributes page to make it easy to share your memories.

Mrs. Marty McDonald, 83, of Good Springs, passed from this life...