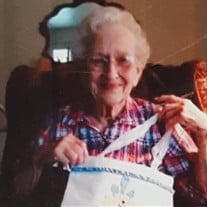 Graveside services for Mrs. Martha Elizabeth Dickerson Tyner, 94, of New London, will be at 10:00 a.m., Monday, July 10, 2017 at Pirtle Baptist Cemetery, with Chris Vidacovich officiating. Family will receive friends following the service at the home of Jean Davidson in Overton. Mrs. Tyner passed away Saturday, July 8, 2017 in Overton. She was born March 26, 1923 in Overton to the late Henry and Sadie Dickerson. Martha attended schools in Henderson and Rocky Mount, and graduated valedictorian of the 1940 class of Overton High School. She married T. Roy Tyner on June 29, 1940. They spent the first few years of their married life moving wherever his work with Humble Oil took them. Martha was a smart and talented woman, and was always busy. In addition to providing a caring and stable home life for her husband and their four children, she raised chickens and sold eggs, baked pies to sell, grew a garden, canned and preserved food, cooked meals for Humble Oil workers, and sewed for her family and others. In her later years, Martha volunteered at the London Museum and Cafe, waiting tables, helping with decorations, and designing and stitching over 300 canvas tote bags as a fundraiser. She was a member of the Chandler Street Church of Christ in Kilgore, where she was famous as a cook. She helped cook for the Monday night ministry, made desserts for the Tri C and baked cookies for VBS. In addition to her parents, she was preceded in death by her husband T. Roy Tyner, and brother, Horace Dickerson. Survivors include: children, Jean Davidson and husband John of New London, Becky Tyner and husband John Hood of New London, Tom Tyner and wife Brenda of Edgewood, Tx, and Lynn Jackson and husband Paul of New London; six grandchildren, Kay Davidson Plucheck and husband Clayton of Tomball, Kyle Davidson of Tyler, Scott Tyner and wife Ali of Carthage, Matt Tyner and wife Marci of Edgewood, Ty Jackson and wife Angela of Tyler, and Jake Jackson and wife Wendy of New London; 18 great-grandchildren; sister, Joyce Dickerson Nuss of Hitchcock, Tx, sister-in-law, Barbara Dickerson of Kilgore; and a host of nieces and nephews. Memorial contributions may be made to the London Museum, PO Box 477, New London, Tx, 75682, or to the charity of your choice. Condolences may be made at www.crawfordacrim.com.

The family of Mrs. Martha Dickerson Tyner created this Life Tributes page to make it easy to share your memories.