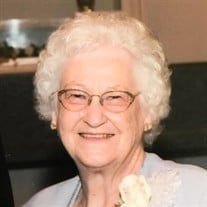 Martha Lou Bundrick 97, of Henderson, Texas, went to Heaven to be with her Lord and many family members on Tuesday, September 7, 2021. Funeral services for Mrs. Bundrick will be held at 2:00 p.m. Friday, September 10, 2021 in the chapel at Crawford-A. Crim Funeral Home. A register book will be available for friends to sign from 1:00 p.m. to 8:00 p.m. Thursday, September 9, 2021 at the funeral home. Martha was born on March 21, 1924, in the McKnight Community in Rusk County. Her parents were Doc and Etta (Gladden) Poston. She graduated from Laneville High School and attended Business School. She married Troy Bundrick from New Salem. She was a homemaker and a caregiver to many in New Salem. She loved to plant gardens and can vegetables, especially pickles. She successfully managed her livestock and farm for many years. After losing her husband in 1970 in an accident, she ventured into the work force. She worked for Texas Agriculture Extension as a program assistant with the Expanded Nutrition Program. Following that, She worked at Henderson High School in the nurse and counseling office. In 1979 she became an admitting clerk at Henderson Memorial Hospital. In 1994 her dream position began at the Depot Museum as a docent conducting tours. Participating in the Heritage Syrup Festival was especially important to her. Her life experience of the Great Depression, the Kilgore Oil Boom, the New London School Explosion, and her knowledge of Homemaking skills made her a valuable asset to the Museum. Many have benefited from her special talent making aprons, bonnets, and blankets. Eleven quilts and six baby blankets were donated to Highway 80 Rescue Mission, which she made with love. In addition to her parents, she was preceded in death by her husband, Troy Bundrick; her sisters, Edna Mae Phillips, and Margie Nay; and great grandson, Jaxen Boothe. She is survived by three daughters, Nancy King, Janet Boothe and husband Earle, and Jo Ann Bundrick; grandchildren, Melissa King, Jason Boothe and wife Cassidy, and Cindy Warren and husband Danny; great grandchildren, Johnathan Davis, Jacie Boothe, Cohen Boothe, Cameren Melton, and Luke Warren; and also a special friend Ray Holman. Pallbearers will be Danny Warren, Jason Boothe, Johnathan Davis, Joel Watkins, Mike McGee, and Heath Nay. Memorial donations may be made to The New Salem Cemetery, Care of Kathy Matthys, 17298 FM 839 South, Henderson, Texas 75654 or Saint Paul's United Methodist Church of Henderson, 2212 Hwy 79 South, Henderson TX 75654. Words of comfort may be shared with the family at www.crawfordacrim.com.

Martha Lou Bundrick 97, of Henderson, Texas, went to Heaven to be with her Lord and many family members on Tuesday, September 7, 2021. Funeral services for Mrs. Bundrick will be held at 2:00 p.m. Friday, September 10, 2021 in the chapel at... View Obituary & Service Information

The family of Mrs. Martha Lou Bundrick created this Life Tributes page to make it easy to share your memories.

Martha Lou Bundrick 97, of Henderson, Texas, went to Heaven to...