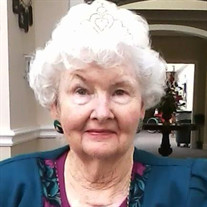 Marjorie June Harrison Quebe, 84 of Houston & Brenham, passed away January 27th, 2018, in Henderson after a brief illness and a long battle. She was born June 15, 1933, in Refugio, Texas to Dudley and Anna Harrison. She was baptized by her maternal grandfather, Rev. L. D. Billnitzer, Aug. 1933, in Jourdanton, Texas and was confirmed in May 1947, in Woodsboro, TX at Peace Lutheran Church by Rev. Shatti. Marjorie loved music and was in the band and choir; also playing the organ for her home church and she loved to paint. She graduated at the top of her class, earning a scholarship to Texas Lutheran College in Seguin where she majored in Biology and Chemistry. Her love of music and talent enabled her to join the famous choir of T.L.C. Her love of science was discovered by her chemistry professor who asked her to follow him to M.D. Anderson in Houston as his research assistant. In Houston, she met and married Albert Quebe Jr. on Sept 5, 1953 in Faith Lutheran Church of Bellaire. She continued in research at Shell lab until the first of 3 children was born. She was preceded in death by her husband Al, in Jan of 2002 her father Dudley in 1982, Mother Anna in 2006 and sister Mary Ann Stice in June of 2008. She is survived by her three children and spouses; Barbara & Craig Knoeller of Livingston; Doug & Chanda Quebe of Flower Mound; and Tressie & Chuck Grant Jr. of Lake Cherokee. Her brother Ronald and wife Marsha of Cypress and sister Nita and husband, Charlie Bode of Marion. Also survived by her grandchildren Jaclyn Knoeller, Michael Knoeller, Pamela Varney, Jennifer Noddin, Pascha Keller & Kendel Carpenter. As well as 5 Great grandchildren, Noah Noddin, Sarah Noddin, Elijah Noddin, Madeline Knoeller & Rachel Knoeller. Marjorie was primarily a homemaker but she did much volunteer work during her 34 years in Houston. When Al retired to Brenham in 1986, she became organist at Zion Lutheran for 16 years. She joined St Paul’s Lutheran when she moved to Kruse Village in 2002. Upon retirement to Brenham, she was an avid worker with Al for the BHS class reunions and was made an honorary member of those classes. She was also Al’s partner in the cattle working and hay making business. Arrangements are under the direction of Crawford-A. Crim Funeral Home. In lieu of flowers, memorial donations may be given to the hospice group or charity of your choice. Now that you are each in good hands, it will not be nearly as hard to leave, for I shall be with your father and Our Heavenly Father. Bless you my children, raise our grandchildren to be as lovely as each of you are. Your father and I have been so fortunate to have you in our lives….carry on. We’ll be watching and praying for you from above. “Oh be careful little feet where you go”…think of us when you see hills and cattle or when you hear music…. Bye Love, Mother. Words of comfort may be shared with the family at www.crawfordacrim.com.

Marjorie June Harrison Quebe, 84 of Houston & Brenham, passed away January 27th, 2018, in Henderson after a brief illness and a long battle. She was born June 15, 1933, in Refugio, Texas to Dudley and Anna Harrison. She was baptized by her maternal... View Obituary & Service Information

The family of Mrs. Marjorie June Harrison Quebe created this Life Tributes page to make it easy to share your memories.