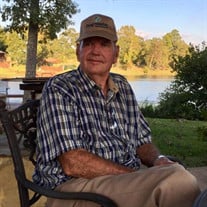 Marion Hugh “Slim” Jordan, 84, of Henderson, Texas, passed away on March 5, 2021, with his loving family at his side. A Celebration of his life will be held at 2:00 p.m., Tuesday, March 9, 2021 at Crawford - A. Crim Funeral Home chapel with Rev. Bill Kuykendall officiating. The family will receive friends one hour before the service at the funeral home. A private family burial will precede the service at the Lakewood Memorial Park. He was born October 5, 1936 in Eastland County, Texas. His parents were Hazel Darlene Jordan and Dwight Wesley Jordan. He graduated High School in Artesia, New Mexico. On October 5, 1956, he married the love of his life, Naomi McElvaney in Loco Hills, New Mexico. A short time later, he started a lifelong career with Fina Oil & Chemical. They moved to Colorado City, Texas, where they raised their three sons. Slim was active in the boys’ lives by teaching them his love of hunting, fishing, and sports. He retired from Fina Oil in Hobbs, New Mexico after 36 years of service. In 2012, Naomi and Slim moved to Henderson, Texas to be closer to the grandchildren. He was a member of the Calvary Baptist Church of Henderson. Through the years, he loved to travel with Naomi and the family. Playing games, and winning in “42” made him happy. Marion Hugh “Slim” Jordan is survived by his wife of 64 years, Naomi Jordan of Henderson; one brother, Doyle Jordan and wife Lucy of Coleman; three sons and their wives, Michael Jordan and Marsha of Colorado City, Jim Jordan and Becky of Henderson, and Bill Jordan and Beverly of Arlington. He is also survived by five grandchildren, Jared Guthrie and Rachel of Tyler, Jeremy Jordan and Leigh of Henderson, Kaleb Jordan and Katy of Carrollton, Dusty Jordan and Allison of Henderson, and Makenzie Jordan of Ft. Worth. Slim had three great-grandchildren who stole his heart - Miles Jordan, Brooklyn Guthrie, and Payton Guthrie; and two step great-grandchildren, Jake Cooper and Megan Cooper. He was preceded in death by his parents and sister. Pallbearers are Tracy McElvaney, Jared Guthrie, Justin Pirtle, Jeremy Jordan, Kaleb Jordan, Dusty Jordan, and Jake Cooper. Condolences may be made at www.crawfordacrim.com.

The family of Marion Hugh "Slim" Jordan created this Life Tributes page to make it easy to share your memories.