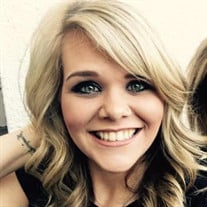 Memorial services for Ms. MariAnne Miller, 30, of Kilgore, will be held at 7:00 p.m., Friday, June 19, 2020 at Crawford - A. Crim Funeral Home chapel. Visitation will be from 4:00-6:00 p.m., Wednesday, June 17, 2020 at the funeral home. She passed away Saturday, June 13, 2020 in Kilgore. MariAnne Christine Miller was born December 16, 1989, to parents Ken and Cinda, at their family home in Red Springs, Texas. As an infant, she was beautiful inside and out, always smiling, laughing, and happy, traits that she carried with her throughout her life. Everyone who knew her will possess memories of someone who was always smiling, laughing, or joking around. She was a blast to be around, even when just sitting on a couch watching TV. She had a contagious sense of humor that would have even the most serious of people rolling with laughter. She was known for saying things like “Okay buddy!” and “Come on, friend.” in the cheeriest of tones. She made friends easily and frequently due to her happy disposition and positive outlook on others. MariAnne hated confrontation and tried to please everyone around. She quickly forgave anyone and everyone who wronged her, without a single exception, but never had to actually hear an apology. She never thought that even the most malicious acts were intentional, because to her, there weren’t any bad people in this world. People just accidentally hurt others sometimes. While that sounds ludicrous to many, she believed this way because that is the way she was. She was kind and gentle, never having the first thought or desire to ever hurt anyone in any way. She truly loved everyone and believed the best of everyone, regardless of whether they truly merited what she thought. MariAnne was a bright soul who loved her freedom. She was known to take spontaneous trips with absolutely no planning, sometimes without even packing anything. She enjoyed all the fun and yummy things in life, often skipping “real” meals in favor of ice cream or candy. She annoyed others (like her siblings) by eating all of the marshmallows out of the Lucky Charms and then putting the box back in the pantry with all the “stupid” cereal still in it. She loved Starbucks and moolattes and only drank homemade coffee if there was creamer to go with it. If asked about the creamer, she’d humorously say that she put the creamer in it “because I love myself.” She enjoyed traveling and shopping. She loved makeup and all things pretty, glittery, and sparkly. MariAnne spent the majority of her life in Kilgore, Texas where she began her journey of motherhood to her first child. While she may have become a mom at a young age, she quickly proved herself to be a wonderful, selfless mother. She dedicated herself wholly to raising her beautiful daughter. Four years later, she had her second child, a handsome little boy, and he completed her little family. She loved her children more than anything else in her life, and did everything in her power to be the best mama she could to them. After earning her cosmetology license, they lived for a few years in Lindale, Texas where she worked in a salon helping others feel beautiful with new hairstyles before moving back to Kilgore for the remainder of her too short life. MariAnne was intelligent, thoughtful, beautiful, hilarious, kind, and fun. She was loved dearly by so many; more people loved her than she ever knew. She never understood how amazing, unique, and gorgeous she was both inside and out in the eyes of all who knew her. She will be missed beyond what mere words could ever describe. The last weeks and months of her life were marked with much pain and turmoil. However, she is now completely at peace and content with no pain. She knows only happiness, light, and love and finally knows that she belongs and always did. Her light has been extinguished from the earth, but is now a newly birthed star in the heavens. Perhaps her life was always meant to show everyone around her to live a little kinder, forgive a little faster, smile every second, appreciate all the beauty and sweetness that the world has to offer, and add a little sparkle to anything too dull. MariAnne is preceded in death by her maternal grandfather, William Terry Byerly, and her paternal grandfather, Leon Miller. She is survived by her children: daughter EmmaLeigh Christine Stroman and son Kane Clark Crews; her father Kenneth Miller and his wife, Norma; her mother, Cinda Lindemann and her husband, Jake; her maternal grandmother Marty Byerly and her paternal grandmother Juliette Miller; her siblings and their spouses: sister Heather Miller-Massey and husband Chris, brother Kenneth Adam Miller, brother Ethan Robinson and wife Kimberly, and brother Dante Lindeman; and nieces and nephews Braison Christopher Massey, Kessli Brielle Massey, Bennett Noah Massey, and AnnaKate Rayne Massey. Words of comfort may be shared with the family at www.crawfordacrim.com.

The family of Ms. MariAnne Miller created this Life Tributes page to make it easy to share your memories.

Memorial services for Ms. MariAnne Miller, 30, of Kilgore, will...