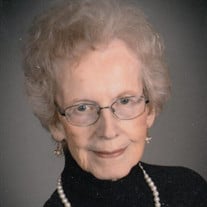 Mrs. Maria Jeannette Abney Ludwig, 88, of Henderson, passed from this life to be with her Lord on September 22, 2021, at UT Health in Henderson. She was born February 27, 1933, in Houston to the late Thomas and Willa lone (Lighthouse) Abney, and was a long-time resident of Henderson. A register book will be available from 8 a.m. until 5 p.m. on Thursday, September 30, 2021, at Crawford-A. Crim Funeral Home, for friends and family to come sign and reflect upon memories with pictures that will be displayed. Jeannette’s life was filled with the expected daily routines and a healthy dose of unexpected adventures. She loved God with all of her heart and hungered for more of Him. She travelled all over the United States and the Philippines, Australia, Egypt, Israel, and other countries with her husband, spreading the Gospel of Jesus Christ. In the 1980s, she helped her husband begin Abundant Life Fellowship in Henderson, Texas. Once, while flying to meet Ray at a crusade, she along with the other passengers of her plane, were told to prepare to crash. As the passengers began to exhibit the expected emotions, Jeannette calmly began singing “He is Lord”. The atmosphere changed as others breathed deeply and began to sing with her. Within a few minutes, the plane was functioning properly and landed without further incident. In her earliest years, she lived in the historic Heights district in Houston, Texas, donned ornate, lace-filled costumes to dance on stage, and went on one of the most memorable trips of her life. Her father took her to the World’s Fair of 1939 in San Francisco where they rented a screened-in porch to sleep and eat cheese sandwiches every evening. At the age of 15, she had the distinction of being the president of the Houston Chapter of the Mel Torme Fan Club. When the Houston Chronicle interviewed her to see how she felt about Torme’s recent marriage, Jeannette said, “I don’t really like it, but if he’s happy, I guess it’s okay with me.” In her senior year of high school, Jeannette played snare drums and was voted Most Beautiful of her senior class. Her yearbook said that she was, “Tall and Stately.” When taking the photo for that honor, the Most Handsome young man had to stand on a hidden box in order to appear as tall as young Miss Abney. A few years later, she had the pleasure of a blind date with a young man name Ray Price. He was a few years older than her, was very polite, and told her that he wanted to become a professional singer one day. That Abney-Lighthouse sense of humor was ever present. She was quick-witted, with a dry sense of humor, and if you knew her well, you knew you had to pay attention or you’d miss out on the fun stuff. As far back as we can remember, she would tell us that she was, “…writing a book on patience and I just can’t wait to get to the end!” Constantly, she was offering to do her famous tap-dance/baton-twirling routine. She was always available for parties and bar-mitzvahs. Jeannette never got upset with Robert when he threw rolls at the Thanksgiving table. She just picked them up, and threw them back. Ray, her husband, always said that had it not been for her, he never would have achieved the things he did in his life. “She just kept pushing me,” he would say. Jeannette, in Ray’s early years of ministry, would sit at the phone calling people and telling them, “You need Ray to come and play at your next crusade.” Her loves included putting numbers in boxes (…nothing like a rousing round of checkbook reconciliation), American Sign Language, sharing the love of reading, coconut pie, cobalt blue, Galveston, Texas, singing in her church choir, and listening to her husband play “Misty” for her. It’s not a light task for her loved ones to let her go, but she shared her full life with all of us and allowed the love of God to shine through in all she did. We are richer for having had her in our lives. We love her, and we call her Blessed. She was preceded in death by her parents Thomas M. Abney and Pauline Vick Abney (stepmother), and W. Ione Busch and Ralph Busch (stepfather), her husband of 52 years, Ray Ludwig, her brother, Thomas Alonzo Abney, her stepson, Marvin Ludwig, and her son-in-law, David Webb. Survivors include her brother, Brian Mark Abney, her children, Kenneth Lockhart (Tina), Carol Lockhart Webb, Robert Lockhart (Sheryl), Rae Marie Ludwig Livsey (Charles), her stepchildren, Ray Ludwig, Jr. (Regina), Kenny Wayne Ludwig (Starlet), Brenda Smith (Dennis), Steven Ludwig (Stacey), her daughter-in-law, Cindy Lyons Lockhart, her grandchildren, Rachael Rodriguez (Justin Rodriguez), Lindsey Lockhart, Steven Deatherage (Jessica), Taylor Webb, Joel Livsey, Christian Livsey (Hannah West), Derek King (April), and Ashley Norris (Jake), and 13 blessed and beautiful great grandchildren, Jerry and Jean Williams, whom she and Ray loved as their own, and her beloved friend and companion to the end; her adopted cat, Baby. In lieu of flowers, memorial donations may be made to the First Baptist Church Music Department at 207 W. Main St., Henderson, TX 75652. Words of comfort may be shared with the family at www.crawfordacrim.com.

Mrs. Maria Jeannette Abney Ludwig, 88, of Henderson, passed from this life to be with her Lord on September 22, 2021, at UT Health in Henderson. She was born February 27, 1933, in Houston to the late Thomas and Willa lone (Lighthouse) Abney,... View Obituary & Service Information

The family of Mrs. Maria Jeannette Abney Ludwig created this Life Tributes page to make it easy to share your memories.