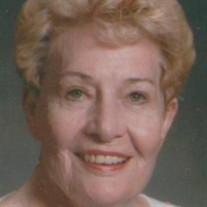 Funeral services for Ms. Margaret Jon Gatlin, 90, of Mt. Enterprise, will be held at 2:00 p.m. on Friday, May 14, 2021, in the chapel at Crawford-A. Crim Funeral Home with Rev. Joe Orr and John T. Furlow officiating. Interment will follow at Shiloh Cemetery under the direction of Crawford-A. Crim Funeral Home. The family will receive friends from 6-8 p.m. on Thursday, May 13, at the funeral home. Ms. Gatlin, locally known as "Jon", passed from this life on May 10, 2021, at her residence. She was born November 7, 1930, in Mt. Enterprise to the late John Thomas and Mozelle (Thompson) Gatlin. Jon grew up in Mt. Enterprise and attended Mt. Enterprise schools before going on to Stephen F. Austin State University where she received her B.A. and M.Ed. degrees. While at S.F.A., Jon was the “Golden Mermaid” beauty on the Library Float in the Homecoming Parade of 1949. Ms. Gatlin went on to a career as a librarian in Spring Branch ISD and North Shore of Galena Park ISD in the Houston area for 41 years and in Nacogdoches High School from 1955 to 1957, with two years at other schools to total 45. She retired from Galena Park North Shore in 1999 to Mt. Enterprise, where she was reared. Jon was selected as Best Secondary Librarian of Texas in 1995 and Texas Librarian of the Year in 2000. She wrote the Peace Corps Plan in 1958 which was implemented by President John F. Kennedy in 1961. Although not yet nationally recognized, her proof granted her credit in her biography included in “2,000 Notable American Women, 10th Edition.” Jon stayed politically active on behalf of teachers, schools, Social Security, and Medicare. She was also a long-time member of First Baptist Church of Mt. Enterprise. In addition to her parents, she was preceded in death by her brother, Norton T. Gatlin. Survivors include her close relatives, John T. Furlow and wife Tracey and family of Whitehouse, Ben Gatlin Sr. and family of Farmersville, Lawrence Edward Gatlin and family of Nacogdoches, Sueanne Gatlin-Agarwal and husband Dr. Vikas Agarwal and family of Austin, Joyce Gatlin Odom and family of Henderson, Betty Gatlin Rogers and family of Austin, and Seth Stein and family of Mt. Enterprise; and a host of other family, colleagues, former students, and many friends. Jon never met a stranger and tried to find relationship in any encounter throughout her life. Words of comfort may be shared with the family at www.crawfordacrim.com.

Funeral services for Ms. Margaret Jon Gatlin, 90, of Mt. Enterprise, will be held at 2:00 p.m. on Friday, May 14, 2021, in the chapel at Crawford-A. Crim Funeral Home with Rev. Joe Orr and John T. Furlow officiating. Interment will follow at... View Obituary & Service Information

The family of Ms. Margaret Jon Gatlin created this Life Tributes page to make it easy to share your memories.