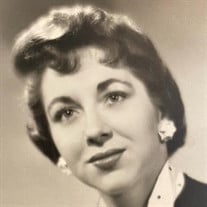 Malee (Wright) Holland, 88, of Henderson, passed away Thursday, December 9, 2021. She was born July 5, 1933, and graduated from Henderson High School in 1951, and from Stephen F. Austin College in Nacogdoches in 1957 with a Bachelor of Science degree. She received a teachers certificate for both elementary and secondary education and taught school in the Fort Worth School District in 1957 and 1958. She married Billy Joe Holland on September 5, 1954. Their first child, Melanie, was born in December, 1958, after which she decided to dedicate her life to raising her children and supporting the career of her husband, an executive at General Electric Credit Corporation for more than 30 years. Their second child, Carey Brigett, was born in January, 1965. The long career with GECC involved many family moves, from Houston to Seattle to Anaheim, California, and finally back to Texas, where they retired in 1990 and settled back in their first love, Henderson, Texas. Malee had a lifelong love of musical theater, a passion which she passed down to her children and grandchildren. She was a member of First United Methodist Church in Henderson. Malee was preceded in death by her parents, Willard and Ernestine Wright, and her husband, Billy Joe Holland, who passed in 2011. She is survived by her daughters, Melanie (Bruce) Oseland, and Carey Brigett (Stefano) Bertamini, as well as her grandchildren, Dr. Laura (Jason) Dorwart, and Tessa, Brett and Brennan Bertamini, and two great-grandchildren, Ruth and Violet Dorwart. Funeral services for Mrs. Holland will be held at 10:00 a.m. on Monday, December 13, 2021, in the chapel at Crawford-A. Crim Funeral Home with Rev. Mike Mayhugh officiating. Interment will follow at Lakewood Memorial Park under the direction of Crawford-A. Crim Funeral Home. Words of comfort may be shared with the family at www.crawfordacrim.com.

Malee (Wright) Holland, 88, of Henderson, passed away Thursday, December 9, 2021. She was born July 5, 1933, and graduated from Henderson High School in 1951, and from Stephen F. Austin College in Nacogdoches in 1957 with a Bachelor of Science... View Obituary & Service Information

The family of Mrs. Malee Wright Holland created this Life Tributes page to make it easy to share your memories.