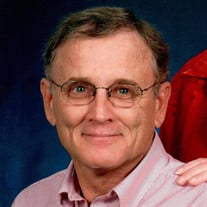 Due to Covid, Services for (James) Lynn Smith, 73, will be a private family graveside service at Lakewood Memorial, with Reverend David Luckert of First United Methodist Church of Marshall officiating. In lieu of visitation, there will be a register book available to pay your respects to Lynn from 8-6 on Wednesday and 8-12 on Thursday. After roughly 4 weeks of trying to overcome Covid, Mr. Lynn Smith died on November 30, 2020 at Christus Trinity Mother Frances in Tyler with his wife, Yolanda, and son, Tory, by his side. Lynn was born in Henderson on March 7th, 1947. After graduating from TSTI in Waco, TX, he began his career as a dental technician. He married the love of his life in December of 1970, and they relocated to Houston, where he started his own dental lab business in 1972. A Henderson resident for the last 40 years, Lynn continued his lab work while also working full-time for Texas Utilities for 30 years. He worked hard to support his family because family was what was most important to him. He went 14 straight years of not taking one sick day because, when you are Lynn Smith, that’s just what you did. He supported his family and showed up for his wife of nearly 50 years, his three children, and his six grandchildren every single day. Two traits that Lynn demonstrated constantly, and right to the end, were dependability and loyalty. He would do anything for those he loved, and if he told you he was going to be somewhere or do something for you, you could bet your last dollar that he would. His word was his bond. James Lynn Smith was preceded in death by his father, James Ebb Smith. He is survived by his loving wife of nearly 50 years, Yolanda Fontenot Smith of Henderson; his mother, Betty Jones Smith of Henderson; brothers Don Smith of Henderson, Neal Smith and wife Rena of Premont; sister Lynda Young and husband Gary of Nashville; son David Smith and wife Maria of New Canaan, CT; son Tory Smith and wife Tamra of Boise, ID; daughter Kelly Smith Howard and husband Micah of Henderson; and grandchildren: Chloe Smith, Vince Howard, Sofia Howard, Evelyn “Evie” Howard, James Howard, and Pax Smith. Pallbearers are Micah Howard, Vince Howard, Gary Young, Don Smith, Neal Smith, Mike Smith and Billy Bob Parker. In lieu of flowers, donations may be made to First United Methodist Church Henderson, 204 N. Marshall St. Henderson, TX 75652 or the charity of your choice. Condolences may be made at www.crawfordacrim.com.

Due to Covid, Services for (James) Lynn Smith, 73, will be a private family graveside service at Lakewood Memorial, with Reverend David Luckert of First United Methodist Church of Marshall officiating. In lieu of visitation, there will be a... View Obituary & Service Information

The family of Mr. Lynn Smith created this Life Tributes page to make it easy to share your memories.