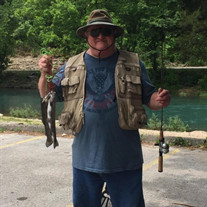 Funeral services for Mr. Lynn Sheppard, 66, of Henderson, will be held at 2:00 p.m. on Friday, January 1, 2021, in the chapel at Crawford-A. Crim Funeral Home with Rev. Mike Ledbetter officiating. Interment will be at 12:00 p.m. on Saturday, January 2, 2021, at Newton Cemetery outside of Delhi, Louisiana under the direction of Crawford-A. Crim Funeral Home. The family will receive friends from 1:00 p.m. until service time on Friday, January 1, at the funeral home. Mr. Sheppard passed from this life on December 30, 2020, at UT Health in Henderson. He was born May 12, 1954, in Delhi, Louisiana to the late Douglas and Nellie (Williamson) Sheppard and has lived in Henderson for the last 33 years. Mr. Sheppard had a long and successful career with Kroger and retired in Henderson as their butcher and Market Manager. When he wasn't working, you could probably find Lynn on a lake or river as he was an avid fisherman. He was also a woodworker, a real handyman that could fix anything. Lynn was an excellent cook and also enjoyed gardening. He loved to travel and got to check off a big bucket list item when he and Annette spent 3 months traveling to and from Alaska shortly after he retired. Mr. Sheppard was a Master Mason and member of Clinton Lodge #23 AF & AM. He was a good man, a dependable man, that his friends and family could always count on, and he was loved by all that knew him. Lynn was also a member of Carlisle Baptist Church for nearly 20 years. In addition to his parents, he was preceded in death by his siblings, Patricia Ann Sheppard and Larry Gene Sheppard. Survivors include his wife of 37 years, Annette Sheppard of Henderson; children, Melinda McDaniel of Wichita, Kansas, Belinda Arnold and husband Kenny of Henderson, Michael Lynn Sheppard and wife April of Jonesboro, Arkansas, and Monica Franklin of Tyler; brother, Jimmy Sheppard of Delhi, Louisiana; sister, Sherry Nell Walker of Delhi, Louisiana; grandchildren, Heather Smith, Shelby Lewis, Tommy Morris Jr., Sierra Berry, and Sydney Berry; 4 great-grandchildren; as well as a host of nieces, nephews, other family and friends. In lieu of flowers, memorial donations may be made to the charity of your choice. Words of comfort may be shared with the family at www.crawfordacrim.com.

Funeral services for Mr. Lynn Sheppard, 66, of Henderson, will be held at 2:00 p.m. on Friday, January 1, 2021, in the chapel at Crawford-A. Crim Funeral Home with Rev. Mike Ledbetter officiating. Interment will be at 12:00 p.m. on Saturday,... View Obituary & Service Information

The family of Mr. Lynn Sheppard created this Life Tributes page to make it easy to share your memories.

Funeral services for Mr. Lynn Sheppard, 66, of Henderson, will...