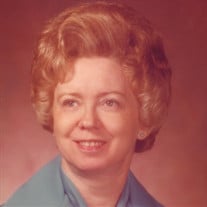 Graveside services for Mrs. Louise Walker, 92, of Henderson, will be held at 10:00 a.m. on Monday, August 13, 2018, at Laneville Cemetery with Rev. Bill Kuykendall officiating. Interment will follow under the direction of Crawford-A. Crim Funeral Home. The family will receive friends following the service on Monday at the cemetery. Mrs. Walker passed from this life on August 11, 2018, at her residence. She was born January 21, 1926, in the Pone community of Rusk County to the late Henry and Mae (Hollingsworth) West and was a life long resident of Rusk County as well as a life long member of St. Paul's United Methodist Church. After high school, Mrs. Walker attended business school in Tyler. She was a hardworking woman and began a long career as an accountant, eventually working for Gearheart and Gearheart Accountants. Outside of work, Louise was a gifted seamstress and enjoyed working in her garden. Above all, she adored her son Steve and dearly loved her grandchildren. In addition to her parents, she was preceded in death by her husband, Elvin "Tex" Walker, and brother, Billy Gene West. Survivors include: son, Steve Walker and wife Gina of Henderson; sister, Virginia Strong of Henderson; grandchildren, Britney Nichole Baker and Steven Roy Walker Jr.; great-grandchildren, Jaylee Minor, Lexie Minor, and Kennedy Baker; as well as a host of nieces, nephews, and other family. Honorary pallbearers will be Murray Franzetti, Roy Thomas, Dana Ashby, Bobby Armstrong, Terry Strong, Nick Nelson, J. Paul Nelson, and Ted Reed. The family would like to say a special word of thanks to Louise's caregivers over the past year, Betsy Hansel and Valari Davis, for their loving and tender care. Words of comfort may be shared with the family at www.crawfordacrim.com.

Graveside services for Mrs. Louise Walker, 92, of Henderson, will be held at 10:00 a.m. on Monday, August 13, 2018, at Laneville Cemetery with Rev. Bill Kuykendall officiating. Interment will follow under the direction of Crawford-A. Crim Funeral... View Obituary & Service Information

The family of Mrs. Louise Walker created this Life Tributes page to make it easy to share your memories.