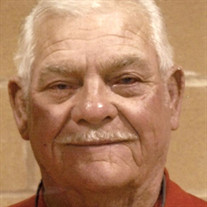 Funeral services for Mr. Lero Sanders, 89, of Henderson, will be held at 10:00 a.m. on Tuesday, July 3, 2018, at Crawford-A. Crim Funeral Home with Pastor Jack Maddox officiating. Burial will follow at Lakewood Memorial Park under the direction of Crawford-A. Crim Funeral Home. Visitation will be held from 5-7 p.m. on Monday, July 2, at the funeral home. Lero was born January 14, 1929, in Pinehill, TX to Homer and Lorene Robinson Sanders. He married Weyma Sanders on August 22, 1946. Lero and Weyma would have celebrated 72 years of marriage this August. They were both members of Southside Baptist Church for many years. Lero will be remembered by his family and friends for his fun-loving personality. He was quick with a smile, never met a stranger and could tell a funny joke like no one else. His mind was sharp to the end and his memory of recalling people and events was astounding. He grew up listening to all the classic country music singers and taught himself to play the guitar at a young age. He could sing like Hank Williams. At family gatherings, Lero would play the guitar and he and Weyma would sing country songs to everyone's delight. He also loved to dance and was born with natural rythym. Lero's work ethic was above reproach. He worked as hard as he played, and instilled in his children that same ethic. Through the years his family heard numerous stories of his early days pickin' cotton while a youngster in Pinehill. During these early years, he and twin brother, Cicero, were inseparable. He often told his family, "if someone came gunning for one of us, they best come prepared, because they would be taking on both." Early in his career Lero worked for Dr. Pepper and Coca-Cola in Henderson. In the mid 1960's he went to work for Cargill, Inc. in Longview. In 1977 he was transferred to Lincoln, Arkansas, where he and Weyma met a host of new friends. Family and friends from "back home" would spend their vacations with Lero and Weyma and be treated to tours of northern Arkansas, eastern Oklahoma and southern Missouri, and of course, fishing on Budd Kidd Lake. He retired from Cargill in 1992 after 30 plus years. Lero's favorite hobby was fishing. He loved to fish and some of his happiest times were spent on Budd Kidd Lake while in Arkansas, and Lakes Murvaul and Sam Rayburn with his fishing buddies, Al Sanders and Bryant Robinson. If he wasn't fishing, he was thinking about fishing. Nearly every day he would check the wind, and no matter how cold or hot it was, he would say, "Man, this would be a great day to be on the lake." Lero was preceded in death by his wife Weyma, his parents, twin brother Cicero Sanders, sister Rosie McDaniel and brother Ervin Sanders. Survivors include his daughter Joy Gayle Manning and husband Bobby of Hallsville; sons Jimmy Sanders and wife Cathy of Henderson; and Karl Sanders and wife Cindy of Royse City; sister Billy Cox of Longview; six grandchildren: Britt Amsler, Aaron Amsler and wife Katie, Amy Pickens and husband Chad; Wes Sanders; Jennifer Johnson and husband Jeff, Adrian Sanders and wife Trinity and 11 great-grandchildren: Abbie, Bryant and Allie Amsler; JJ and Brody Pickens; Micah, Maddie and Molly Johnson; and Kristen, Keith and Kaleb Sanders. The family offers a special "Thank You" to Rose Cook for the care she gave our mother and daddy. Pallbearers will be Micah Johnson, Britt Amsler, Aaron Amsler, Adrian Sanders, Joe Sanders, Chad Pickens, Jeff Johnson, and Burl Richards. In lieu of flowers, memorial donations may be made to Southside Baptist Church at 1801 Old Nacogdoches Rd, Henderson, TX 75654, or the charity of your choice. Words of comfort may be shared with the family at www.crawfordacrim.com.

Funeral services for Mr. Lero Sanders, 89, of Henderson, will be held at 10:00 a.m. on Tuesday, July 3, 2018, at Crawford-A. Crim Funeral Home with Pastor Jack Maddox officiating. Burial will follow at Lakewood Memorial Park under the direction... View Obituary & Service Information

The family of Mr. Lero Sanders created this Life Tributes page to make it easy to share your memories.

Funeral services for Mr. Lero Sanders, 89, of Henderson, will...