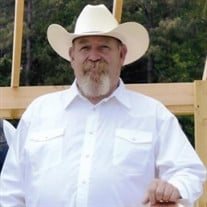 Funeral services for Mr. Leon "Bubba" Wood, Jr., 48, of New London, will be at 10:00 a.m., Monday, August 16, 2021 at Crawford - A. Crim Funeral Home chapel with Bro. Jason Wood and Richard Owens officiating. Interment will follow at Mt. Hope Cemetery with Bro. Rodney McDuff officiating under the direction of Crawford - A. Crim Funeral Home of Henderson. Mr. Wood passed away, Thursday, August 12, 2021 at Hospice of East Texas in Tyler. Leon "Bubba" Wood Jr. of New London, Texas was born on December 24, 1972 in Henderson, Texas to Leon and Lena Wood. Leon worked as a truck driver for twenty four years, the last thirteen of which he spent with 5J Oilfield Services. Leon was well loved and respected in the trucking industry. One of his greatest passions was cooking for the ones he loved. He never met a stranger and would give the shirt off his back for those in need. He was a member of Mt. Calvary Independent Baptist Church of Overton, Texas. He loved to serve God and sing alongside his wife and kids. Leon will be greatly missed by those whose lives he touched. He was preceded in death by his loving mother, Lena Wood, sister, Debbie Roberts, brothers, Raymond Owens, Orland Owens, and Bobby Tiner, and nephew, Wayne Owens. He was survived by his loving wife of twenty nine years, Gayle Wood. Four children, Kimberly Hambrick, Kristen Wood, Peyton Wood, and Leon Wood III. His father Leon Wood Sr. and sister, Gwen Owens, and brothers, Richard Owens, his wife Tammie Owens, Jason Wood, his wife Leanne Wood, sister, Felicia Ridens and her husband Jonathon Ridens. Two granddaughters who were his pride and joy, Addison Hambrick and Makenna Hambrick. His "adopted son" Adam Stephenson and numerous nieces and nephews. Leon touched a multitude of people who will carry on his memory and will miss him greatly. Pallbearers are Adam Stephenson, Peyton Wood, Tom Rafferty, Curtil Frizzel, Jonathon Ridens and Daniel Wynn. Honorary pallbearers are Charles Reynolds, Mike Baker, Sr., and Mike Baker, Jr. In lieu of flowers, the family requests that donations be made to Texas Oilfield Angels, "Bubba" Wood, P.O. Box 127, Henderson Texas 75653, or Hospice of East Texas, 4111 University Blvd, Tyler, TX 75701. Condolences may be made at www.crawfordacrim.com.

The family of Mr. Leon "Bubba" Wood Jr. created this Life Tributes page to make it easy to share your memories.