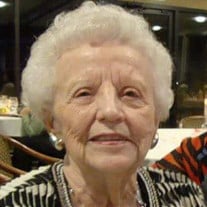 A celebration of the life of Mrs. LeEtta Brown Murphy, 86, of Fremont, Nebraska, will be held at 2:00 p.m. on Friday, May 5, 2017, at St. James Episcopal Church in Fremont under the direction of Dugan Funeral Chapel. A reception will follow at the Fremont Golf Club. Mrs. Murphy passed from this life on May 1, 2017, at Brookestone Meadows in Elkhorn, Nebraska. She was born September 30, 1930, in Cedar Bluffs, Nebraska to the late Harold “Brownie” and Lilly Brown and graduated from Fremont High School in 1949. She was a devoted member of St. James Episcopal Church for almost sixty years. LeEtta was a kind soul who had many life-long friends. She was loved and admired by those who knew her. Mrs. Murphy committed her life to raising her children and grandchildren in an atmosphere of warmth and support. Many mentioned how she was like a second mother to them and how her presence had enriched their lives. In addition to her parents, she was preceded in death by her sister Bernice Long, and her grandson Adam Burdick. Survivors include her five children, Erin Rinaker and husband Dudley of Fremont, Nebraska, Nancy Bentz and husband Greg of Overland Park, Kansas, Mary Longacre and husband Gary of Fremont, Nebraska, Pat Murphy and wife Vicky of Henderson, and Heather Burdick of Sabetha, Kansas; grandchildren, Benjamin Rinaker and wife Nazanin Berarpour of Quito, Ecuador, Meredith Allen and husband Hunter of Denver, Colorado, Colin Rinaker and fiancé Moira Groh of Brooklyn, New York, Elizabeth Cornell and husband Gaelan of Overland Park, Kansas, Jeffrey Bentz of Kansas City, Missouri, Evan Longacre and wife Nikki of Fremont, Nebraska, Morrow Allemang and husband Alex of Omaha, Nebraska, Pierce Longacre of Houston, Matthew and Seth Burdick of Sabetha, Kansas, Josh Hardy and wife Pam, Matt Hardy, and Joel Hardy and wife Brittany, all of Henderson, Texas; and six great-grandchildren Andrew and Arezu Rinaker, Graham Cornell, Brooks and Hayes Longacre, and Aidan Allemang. LeEtta’s family would like to thank the wonderful caregivers at Brookestone Meadows. She spent the last few years of her life there and received loving care from the staff. In lieu of flowers, LeEtta’s family requests memorials to St. James Episcopal Church at 301 East 5th Street, Fremont, NE 68025. Words of comfort may be shared with the family at www.duganchapel.com.

A celebration of the life of Mrs. LeEtta Brown Murphy, 86, of Fremont, Nebraska, will be held at 2:00 p.m. on Friday, May 5, 2017, at St. James Episcopal Church in Fremont under the direction of Dugan Funeral Chapel. A reception will follow... View Obituary & Service Information

The family of Mrs. LeEtta Brown Murphy created this Life Tributes page to make it easy to share your memories.

A celebration of the life of Mrs. LeEtta Brown Murphy, 86, of...