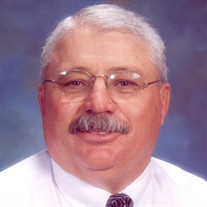 Delma Lee “Stumpy” Maddox Jr., 69 of Nacogdoches, Texas, died on Monday, March 19, 2018. He was born June 21, 1948 at Saint Joseph’s Hospital in Houston, Texas to parents Delma Lee Maddox Sr and Rosemary Teresa (Vinas) Maddox. He was a 1966 Graduate of St. Pius X High School in Houston and a 1989 graduate of University of Texas at Tyler. He was a member of Sacred Heart Catholic Church in Nacogdoches, Texas. He married Katherine Carlisle Maddox, daughter of Lee Roy and Mary Aileen Carlisle, November 7, 1969. In 1968 he dropped out of University of Houston to begin a career as a Journeyman Electrician, member of the International Brotherhood of Electrical Workers Local Union 716. He fulfilled a promise he made to his father to someday finish his college education when he moved to Henderson, Texas in 1983. He attended Kilgore Jr College and UT Tyler to complete his Bachelor of Science in mathematics and began a new career coaching and teaching. While finishing school, he worked around Henderson and East Texas as a master electrician, umpiring baseball games, refereeing football and basketball games. During his second career, he was employed as a Coach and/or Math teacher by Carlisle ISD 1989-1990, Beckville ISD 1990-1998, and Nacogdoches ISD 1998 until retirement in 2013. After retirement he pursued his leatherwork hobby making assorted items for friends, family and charitable organizations. He was a member of IBEW Local Union 716, the “Horsepitality Committee” of the Houston Livestock and Rodeo Association, the Henderson Rotary Club, the Southwest Officials Association. He was a member of the SASS (Single Action Shooting Society) organization where he was known by his nickname “Swampwater Stumpy”. He was involved in several team sports throughout his life and enjoyed hunting, fishing, golf and archery. He applied his interest in photography by taking game videos of Saint Pius X Panther football games after he graduated. He enjoyed taking action pictures of friends at various calf roping events. He loved horses, leading him eventually to his all time favorite pastime training roping horses and roping calves. He bought his first roping horse in 1973 while attending a summer program at Josey’s Ranch as a student. He worked for Martha and R.E. Josey’s ranch in Karnak,Texas from 1974 to 2018 where many of the students only knew him, either as the “Dorm Daddy,” or as a roping instructor nicknamed “Mr. Stumpy.” He considered R.E. , Martha, and the other Team Josey employees and instructors a second family and looked forward to working with them during their annual events. He is survived by Katherine Carlisle Maddox, his wife of 48 years, his son Jeffrey Scott Maddox and wife Amy of Leander, Texas, his daughter Jenny Lee Maddox of Houston, Texas. Brother Mike and his wife Dale Maddox, brother David and Joanna Maddox and Sister Tina Jo Maddox, all of Houston. Sister-in-law Jane Brightwell, Mt. Enterprise, and brother-in-law Gary Griffin and Sharon, Mt. Enterprise. Grandson Clayton Dell Maddox and Granddaughter Camryn Malone Maddox, both of Leander, Texas. Nieces, nephews, great nieces, great nephews and cousins in numbers too great to count. Predeceased by his parents, Lee and Rosemary Maddox, brother Phil Maddox, and granddaughter Kaylee Michelle Maddox. Visitation will be held at Crawford-A. Crim Funeral Home in Henderson, Texas on March 21, 2018 from 5:00 p.m. to 7:00 p.m. Funeral services will also be held at Crawford-A. Crim Funeral Home on March 22, 2018 at 3:00 p.m. with Reverend Terrance D. Hicks officiating. Burial will follow at Moyers Cemetery under the direction of Crawford-A. Crim Funeral Home. Members of Team Josey will serve as pallbearers, Jeb Barney, Chad Henry, Terry Thomas, Suvoy Rosser, Frank Jagot, and Shay Stevenson. Honorary pallbearers, R.E. Josey, Frank Snell, Jim Bob Mayes, and Randall Wells. Memorials in lieu of flowers may be made to the American Cancer Society at ACS CAN, P.O. Box 720295, Oklahoma City, OK 73172-0295 or Saint Pius X Scholarship Fund at 811 W. Donovan St., Houston, TX 77091-5643. Words of comfort may be shared with the family at www.crawfordacrim.com.

The family of Mr. Lee "Stumpy" Maddox Jr. created this Life Tributes page to make it easy to share your memories.