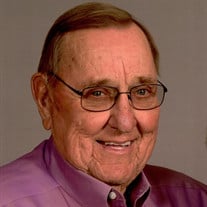 Funeral services for Mr. Lavern Gibson, 81, of Henderson, will be held at 10:00 a.m., Friday, January 3, 2020, at First Baptist Church of Henderson with Dr. David Higgs and Rev. Don Edmiston officiating. Interment will follow at Rusk County Memorial Gardens under the direction of Crawford-A. Crim Funeral Home of Henderson. The family will receive friends from 5:00-7:00 p.m., Thursday, January 2, 2020, at the funeral home. Allen Lavern Gibson, 81, went home to be with his Lord & Savior Monday, December 30, 2019. He passed away after a brief illness. He had many nicknames including Little Man, Charlie, Clutch, Babe, Pops, Papa & Mr. G. He was born 3 months premature in Henderson to Evelyn & Vernon Gibson and spent the first 3 months of his life in an incubator. He was sick most of his childhood, spending an entire year in John Sealy Hospital in Galveston before recovering from the mystery illness. He graduated from Henderson High School and went straight to work for his father as a grease monkey at Gibson Gulf Service Station, soon taking over his 1949 3/4 ton truck with a hand winch. He married Willa Ruth Box in 1960 and they became partners in every sense of the word. They founded and worked together at Gibson Service company with her doing bookkeeping on napkins, paper bags & envelopes- anything Lavern could write tickets on while both burning the midnight oil at their 24/7 company, building it to the largest heavy duty wrecker service from Oklahoma to Houston and Dallas to Louisiana. They eventually added heavy transportation, hot shots & crane services plus just about any equipment it took to move big things. After more than 40 years he and Willa sold the business and then most often he could be found in his happy place, tinkering around his farm with his many animals, including his small herd of buffalo & his beloved dog Lou & then Sugar. He was married to Willa for 45 years until her death in 2005. After retiring from the wrecker business Willa always said that Lavern always wanted to just work one more big wreck, so it was fitting that his last ambulance ride was in a fender bender in Tyler. Service to his church and community was important. He was a member of First Baptist Church for almost 60 years and enjoyed being a deacon & door greeter for years. He served on the Henderson City Council for 13 years, then Mayor Pro-tem for 3 years. He was a certified volunteer fireman for 32 years and a Master Mason & Shiner for almost 50 years. Among some of his many business achievements, Lavern was inducted into the International Towing Hall of Fame and the Texas Towing Hall of Fame. He was a founding member of the National Towing & Recovery Association of America which currently boasts over 3000 members in 13 countries. He served a term as president of the Kiwanis Club, was a member of the Rusk County Peace Officers Assoc., Texas & Southwest Cattle Raisers Assoc., National Bison Assoc., Director of Texas Motor Truck Assoc., Oil Field Haulers Assoc., East Texas Emergency Preparedness Group, Commissioner Rural Fire District, East Texas Council of Governments, Rusk County Peace Officers Assoc., & Federal Mine Safety Assoc. among many other associations. Lavern was loved & respected by many people, making friends everywhere he went. He often commented on how blessed he was to have so many friends, however, his grandchildren were the light of his life. He adored and bragged on them all the time. When they came to Henderson to visit, he was found giving them 4-wheeler rides, throwing mud at them in the creek and playing in the hay barn with them. His grandkids could operate a backhoe by the age of 3, thanks to him. Many special memories were made with them at their little log cabin on Lake Cherokee. Friends will remember his generosity, friendliness & sense of humor and tendency to play pranks. Everyone that knows Lavern can tell stories of capers he pulled them into. He managed to have lots of mishaps as he had no sense of danger, his family claiming he had 9 lives, however, he well bypassed that number years ago. He was the first to lend a hand and the last to leave. After both lost their beloved spouses to cancer, Lavern and Renee met at church and found they had much in common. A new chapter of life started for the couple on May 25, 2008. Church functions, family gatherings and fun times with friends were cherished by them both. New adventures awaited them as they traveled near and far with their RV Buddies. “Mr. G”, as he was known by Renee’s grandchildren, added the special touch of a grandfather’s love. He was a strong Christian influence in their lives and will be greatly missed. Lavern is survived by his wife, Renee Gibson, his daughter and husband, Denise & Travis White; son & daughter-in-law, Allen & Dede Gibson; step-daughter & husband, Kim & Matt Doerge; step-son & wife, Tim & Amy Turlington. Grandchildren, Lydia & Austin White, Laura Anne White, Kylar Gee; step-grands, Maury & Tanner Kissling, Drew Doerge, Ava & Lilly Turlington; great-grandchildren, Henry & Dottie White. Pallbearers will be Todd Matlock, Mike Pool, Andy Chessney, Tommy Jimerson, Robert Harris, David Harris, Dennis Owens, and Dwayne Pirtle. Honorary pallbearers will be Billy Soape, Bob Haynes, Larry Morris, Eddie Flores, the Deacons of First Baptist Church, Adult 7 Sunday School Department, and the Henderson Volunteer Fire Department. In lieu of flowers, memorial donations may be made to First Baptist Church at 207 W. Main St., Henderson, TX 75652. Words of comfort may be shared with the family at www.crawfordacrim.com.

The family of Mr. Lavern Gibson created this Life Tributes page to make it easy to share your memories.

Funeral services for Mr. Lavern Gibson, 81, of Henderson, will...