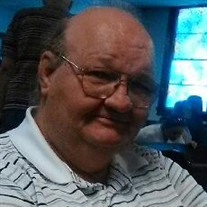 Funeral services for Mr. Larry Smires, 63, of Henderson, will be held at 2:00 p.m. on Thursday, January 18, 2018, in the chapel at Crawford- A. Crim Funeral Home with Bro. Pete Thompson officiating. Interment will follow at Pleasant Hill Cemetery under the direction of Crawford-A. Crim Funeral Home. The family will receive friends from 6PM to 8PM on Monday, January 15, at the funeral home. Mr. Smires passed from this life on January 11, 2018, at ETMC in Tyler. He was born July 3, 1954, in Overton. Larry later spent 7 years in Michigan before moving back to Rusk County nearly 40 years ago. He worked in the oilfield for S&W, later Bolt, for 35 years before his retirement. Larry enjoyed fly fishing, and he loved the horse races and his trips over to Shreveport. He was an unwavering Baltimore and Indianapolis Colts fan, going back to the days of Johnny Unitas and later Peyton Manning. Larry was a faithful member of Pleasant Hill Missionary Baptist Church. He will always be remembered as a loving husband and a loving and doting "Pawpaw" to his grandchildren. He was preceded in death by his father Cecil Smires, the mother of his children Marcia Smires, brother-in-law Gary Helsel, and his niece Melissa Helsel. Survivors include his wife of 16 years Barbara Smires, daughters Sherry Smith and husband Kelly, Heather Lindsey and husband Aarron, Angela Smires, and Kaylin Bushue, his mother Berta Smires, mother-in-law Glyndon Thomas, grandchildren Zoey Smires, Cloe Smires, Kristian Smith, Colt Lindsey, and Eli Lindsey, sister Vicki Helsel, brother Jerry Smires and wife Shirley, and his best friend Tom Copeland. Pallbearers will be Tom Copeland, Tom Copeland Jr., Bo Helsel, Aarron Lindsey, Bubba Sail, and Mark Smires. Honorary pallbearers will be Randy Garrett and the rest of Larry's cousins. Words of comfort may be shared with the family at www.crawfordacrim.com.

Funeral services for Mr. Larry Smires, 63, of Henderson, will be held at 2:00 p.m. on Thursday, January 18, 2018, in the chapel at Crawford- A. Crim Funeral Home with Bro. Pete Thompson officiating. Interment will follow at Pleasant Hill Cemetery... View Obituary & Service Information

The family of Mr. Larry Smires created this Life Tributes page to make it easy to share your memories.

Funeral services for Mr. Larry Smires, 63, of Henderson, will...