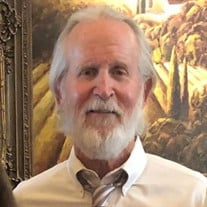 Funeral services for Mr. Larry D. Cain, 73, of Tyler, will be held at 2:00 p.m. on Friday, August 20, 2021, in the chapel at Crawford-A. Crim Funeral Home with Rev. Dwain Knight officiating. Interment will follow at Tyler Memorial Cemetery under the direction of Crawford-A. Crim Funeral Home. The family will receive friends from 1:00 p.m. until service time on Friday, at the funeral home. Mr. Cain passed from this life on August 17, 2021, at Meadow Lake Assisted Living in Tyler. He was born April 20, 1948, in Tyler to the late Hershell and Gwen Cain and was raised in Tyler. Larry spent the majority of his life in Henderson before moving back to Tyler in later years. He served his country in the United States Navy and later received a BA in Computer Science and went on to a career at Anderson-Hickey where he retired as Director of Materials. Mr. Cain enjoyed riding his Harley, attending sporting events, and loved playing golf. In earlier years, Larry coached his daughters in softball and would later join the Rotary Club of Henderson. Mr. Cain very much enjoyed spending time with his family and grandchildren. In addition to his parents, he was preceded in death by his first wife, Marilyn Wedgeworth Cain; and nephew, Christopher Cain. Survivors include his daughters, Candee Cain Aycock of Flint, Shannon Toon and husband Scott of Flint, and Andrea Thornton and husband Phillip of Henderson; siblings, Linda Trull and husband Mike of Gilmer and Bob Cain and wife Nancy of Tyler; grandchildren, Caleb Gilley and wife Kerby, Mattison Aycock, Makenna Aycock, Bailey Kirk and husband Kaleb, Jackson Toon and wife Jordan, Lara Toon, Mallory Lambeth, Malea Thornton, and Marissa Thornton; 4 great-grandchildren, Cain Gilley, Sage Toon, Trace Harkrider, and Ellie Kirk; his former wife of 37 years, Teresa Cain; and a host of nieces, nephews, other family and friends. Pallbearers will be Caleb Gilley, Jackson Toon, Kaleb Kirk, Scott Toon, Phillip Thornton, and Matt Aycock. Words of comfort may be shared with the family at www.crawfordacrim.com.

The family of Mr. Larry D. Cain created this Life Tributes page to make it easy to share your memories.