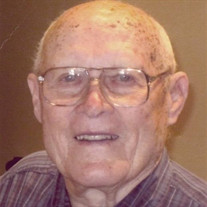 Mr. L.D. Hendrix, 91, of Henderson, formerly of Woodville, went home to rest with his Lord and Savior on April 11, 2018, in Carthage. Funeral services for Mr. Hendrix will be held at 10:00 a.m. on Saturday, April 14, 2018, in the chapel at Crawford-A. Crim Funeral Home with Dr. David Higgs officiating. Interment will follow at 3:00 p.m. on Saturday at Big Sandy Cemetery in Polk County under the direction of Crawford-A. Crim Funeral Home. The family will receive friends from 5-7 p.m. on Friday, April 13, at the funeral home. Mr. Hendrix was born July 26, 1926, in Honey Island, Texas to the late Aris Anson and Annie (Moye) Hendrix. He proudly served his country in the U.S. Army during World War II and attended the University of Houston where he would receive his Bacherlor’s and Master’s degrees. L.D. was a smart man and an excellent basketball player, and that talent landed him a place with Phillips 66 Petroleum on their semi-pro team. This would lead to a career as a jobber and distributor with Phillips 66 and later, his own company, Davenport Oil Company. After retiring from the oil business, Mr. Hendrix became a rancher and tree farmer. He was very active in his church including teaching Sunday School for many years. Above all, L.D. was a faithful Christian and a wonderful husband, father, and grandfather. In addition to his parents, he was preceded in death by his son Dean Hendrix and 8 brothers and sisters. Survivors include his wife of 68 years Lois Hendrix of Henderson, daughters Linda Dvorak and husband Bill of Frisco, Pam Thomas and husband Dave of Wichita, Kansas, Valerie Sheppard and husband Dr. Guy Sheppard of College Station, and Anne Pool and husband Wendell of Henderson, 11 grandchildren, 18 great-grandchildren, and a host of nieces, nephews, and other family and friends. Pallbearers will be John Pool, Jake Pool, Clayton Sheppard, Grant Dvorak, Jerry Hendrix, and Guy Sheppard. In lieu of flowers, memorial donations may be made to the Alzheimer’s Association at P.O. Box 96011, Washington, D.C. 20090-6011 or www.alz.org. Words of comfort may be shared with the family at www.crawfordacrim.com.

The family of Mr. L.D. Hendrix created this Life Tributes page to make it easy to share your memories.