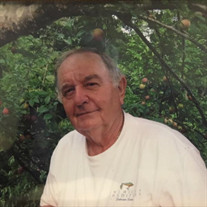 Mr. L.D. “Sonny” Hardy, 86, of Henderson, passed from this life on June 24, 2020, at UT Health East Texas in Tyler. He was born August 24, 1933, in Henderson, the fifth child, and first son, of eight children born to the late Lawrence D. Hardy Sr. and Nellie Pearl (Williams) Hardy. Sonny grew up on a farm without electricity or running water where he did the work of a man day in and day out from the age of 7. He was never without a job until the day he retired. Mr. Hardy graduated from Gaston High School in 1951 and attended Tyler Junior College. December 1953 marked two milestones in Sonny’s life, his marriage to Clara Taylor, and his entry into the United States Army during the Korean Conflict where he rose to the rank of Sergeant in 18 months. He served, attached to the Air Force at March Air Force Base, in radar communication. After military service, Mr. Hardy worked for SWEPCO for 10 years before working 30 years with American National Insurance Company retiring in 1992. Sonny married Jenny Marwil on December 31, 1988. Mr. Hardy was an avid gardener and took great pride in his vegetables, especially his tomatoes. He also loved fishing and was a true fan of Arp football, not missing a game in 45 years. Sonny also served as President of the Henderson Jaycees, was a charter member and Past President of the Henderson Optimist Club, and he served as President of the Henderson Little League Association. He was an excellent cook and enjoyed using that gift for his family. However, his most enjoyable endeavor was teaching his grandchildren to fish, and he loved watching them participate in athletics. Above all, Mr. Hardy was a caring husband, father, grandfather, and great-grandfather; a true protector of his family. He was a good man! In addition to his parents, he was preceded in death by his first wife, Clara Hardy, the mother of his children; siblings, Judy Kern, Shirley Hearn, Janie Mullican, Lois Wesson, JoAnn Kern, and Lenard Hardy; as well as a grandson, Grey Medlin. Survivors include his wife, Jenny Hardy; son, David Hardy and wife Valerie; daughter, Lori Padgett; step-daughters, Jeana VanDyke and husband Jody, and Beth Medlin; sister, Yvonne Sutton and husband John; grandchildren, Nick Hardy and wife Kim, Breanna Padgett, Bailey VanDyke, Nate VanDyke and wife Bailey, Price Medlin, Rowe Medlin; two great-grandchildren; and numerous nieces and nephews.

The family of Mr. L. D. "Sonny" Hardy Jr. created this Life Tributes page to make it easy to share your memories.