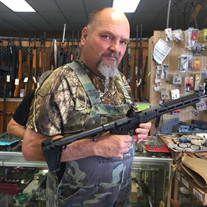 Memorial Visitation for Mr. Kevin Stevens, 60, of Henderson, will be held from 5:00 pm until 7:00 pm on Saturday, November 20, 2021 at the funeral home. Mr. Stevens passed from this life on November 14, 2021, at UT Health in Tyler. He was born August 25, 1961, in Hamlin to the late Loie Francis and Altie Nadene (McCright) Stevens and has lived in Henderson for the last 35 years. Early on in his time in Henderson, Kevin worked for Jacson, Inc. and was currently a Security Guard for Sadler’s Smokehouse. Mr. Stevens was also an outdoorsman and loved to go hunting. In addition to his parents, he was preceded in death by his daughter, Marie Stevens; stepson, Timothy Shane Neibert; and father-in-law, Noah Louviere. Survivors include his wife of 16 years, April Stevens of Henderson; son, Loie Joshua Stevens Sr. and wife Heather and their son, Loie Joshua Stevens Jr. of Reklaw; stepsons, Stephen Moore and wife Shayla Bell of Henderson, and Brent Neibert of Arizona; stepdaughter, Christina Reaux of Troup; sister, Teresa Seaton and husband Tim of Saginaw; 5 grandchildren; and a host of nieces, nephews, other family, and friends. Words of comfort may be shared with the family at www.crawfordacrim.com.

The family of Mr. Kevin Stevens created this Life Tributes page to make it easy to share your memories.