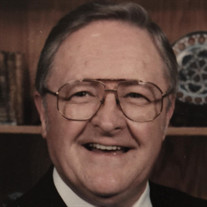 Kenneth Wayne Nichols, 88, formerly of Henderson, TX, joined his wife, other family members and friends when he arrived his Eternal Home with Jesus on Sunday morning, July 1, 2018. A Celebration of Brother Kenneth’s life and ministry will be held at 11:00 a.m. on Saturday, July 7, 2018, in the chapel at Crawford-A. Crim Funeral Home with evangelist Billy Foote officiating. Interment will follow at Lakewood Memorial Park under the direction of Crawford-A. Crim Funeral Home. The family will receive friends at 10:00 a.m. until service time on Saturday, July 7, 2018 at the funeral home chapel. He was born February 7, 1930 to Louis and Rena Nichols in Grand Saline, TX, he was born again and baptized 11 years later. A devoted follower of Jesus Christ, Kenneth was called by God in 1963 to preach the Gospel of Jesus Christ and subsequently ordained to do so by Calvary Baptist Church, Tyler, TX in 1964. Bro. Kenneth served as pastor of 8 Baptist churches in the East Texas area from 1964 through 2006: Hebron Baptist Church, Tyler; Crim’s Chapel Baptist Church, Henderson; Clawson Baptist Church, Lufkin; First Baptist Church, Tatum; First Baptist Church, Timpson; Pine Hill Baptist Church, Henderson; Eastside Baptist Church, Henderson; and First Baptist Church, Turnertown. Upon graduating Grand Saline High School where he played basketball and football, Kenneth joined the U.S. Army in 1948 before serving in the Army Reserves for 7 more years. He married his high school sweetheart Dorothy Vandergriff in 1949 and two years later welcomed their firstborn son Randy who was followed by Debbie, Marylinda and Gary within seven years. Bro. Nichols embodied a servant’s heart and was a very loving, gentle and compassionate shepherd of his people, who enjoyed frequently visiting the hurting in their homes, hospitals and long-term care facilities. He never wavered in his love and devotion to his Lord and Savior, his flock, or his beloved wife. He was well-known and greatly respected for his consistently godly example of how a man should love, honor and serve his Lord and his wife. Kenneth is preceded in death by Dorothy, his devoted wife and ministry partner for 67 ½ years, and his parents. He is survived by his 4 children, 6 grandchildren and 13 great-grandchildren. Words of comfort may be shared with the family at www.crawfordacrim.com.

Kenneth Wayne Nichols, 88, formerly of Henderson, TX, joined his wife, other family members and friends when he arrived his Eternal Home with Jesus on Sunday morning, July 1, 2018. A Celebration of Brother Kenneth&#8217;s life and ministry will... View Obituary & Service Information

The family of Bro. Kenneth W. Nichols created this Life Tributes page to make it easy to share your memories.