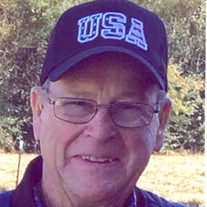 Funeral services for Mr. Kenneth McAnally, 72, of Laneville, will be held at 11:00 a.m., Monday, October 29, 2018, in the chapel at Crawford-A. Crim Funeral Home with Jason Taylor and Mike Harman officiating. Interment will follow at Maple Grove Cemetery under the direction of Crawford-A. Crim Funeral Home of Henderson. Family will receive friends from 10:00 a.m. until service time on Monday at the funeral home. Mr. McAnally passed from this life on Friday, October 26, 2018, at Trinity Mother Frances in Tyler. He was born October 10, 1946, in Jacksonville to the late Harold and Jeannie (Nance) McAnally and has lived in Henderson for the last 38 years. Kenneth proudly served his country in the United States Army and was stationed in Germany during the Vietnam War. After service to his country, he went to work as a welder in Houston, with his father, for Southwest Fabricating. He later went to work for Marathon Oil and covered all aspects of the oil and gas industry. Kenneth was a cowboy at heart and made work a hobby. He enjoyed hunting, gardening, and fishing, but above all was a wonderful husband, father, and grandfather. Kenneth was a member of Bar None Cowboy Church. In addition to his parents, he was preceded in death by his brother, Ernest McAnally. Survivors include his wife of 50 years, Charlotte McAnally of Laneville; sons, Randall McAnally and wife Paige of Henderson, and Ryan McAnally and wife Alexa of Laneville; sister, Leta Jackson and husband Bill of Fairfield; grandchildren, Reid McAnally, Meg McAnally, Macy McAnally, Garrett McAnally, Kate McAnally, and Georgia McAnally; as well as a host of nieces, nephews, and other family and friends. Pallbearers will be Rick Wilson, Craig Jackson, Paul Reed, David Warren, Edward Warren, and Jeff Harman. Honorary pallbearers will be Randall Padgett, Barry Poole, Bill Jackson, Larry Rhea, Perry Penney, Ron Smith, Norman Green, and Kirk Weaver. In lieu of flowers, donations may be made to the MDS Foundation, 4573 S. Broad Street, Suite 150, Yardville, New Jersey 08620. Condolences may be made at www.crawfordacrim.com.

Funeral services for Mr. Kenneth McAnally, 72, of Laneville, will be held at 11:00 a.m., Monday, October 29, 2018, in the chapel at Crawford-A. Crim Funeral Home with Jason Taylor and Mike Harman officiating. Interment will follow at Maple Grove... View Obituary & Service Information

The family of Mr. Kenneth McAnally created this Life Tributes page to make it easy to share your memories.