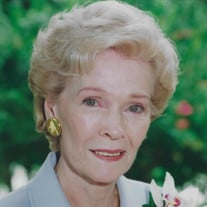 Kathryn Tice Mann, age 94, passed away quietly on October 20, 2020, after a lengthy illness. She was born on October 10, 1926, in Gainesville, Texas, the eldest child of Tom Blankenship, a Halliburton employee, and Sarah Elkins Blankenship, a teacher. She attended school in Callisburg, Texas in her early years, then went on to Gainesville High School, where she was a 1943 honor graduate. She continued her education at Texas State College for Women (now Texas Women’s University), where she was a popular student, named Junior Beauty in 1947 and Redbud Queen in 1948, and in recognition of such honor was escorted by Dr. L. H. Hubbard, then TSCW President, to Dallas to attend the opera. She received both Bachelor of Arts and Bachelor of Science degrees in 1948, and shortly after graduation moved to Huntsville, where she taught Art at Sam Houston State for four years, and studied in Pueblo, New Mexico, toward her Ph.D. She became the bride of James H. Mann on August 10, 1952, at Little Chapel of the Woods on the TSCW campus, a place of special significance to her, since she had helped install the stained glass windows there during her student years. The newlyweds spent the next year in Houston while Dr. Mann completed Baylor Medical School, then moved to Fort Worth for his two-year residency at City-County Hospital, 1953-1955. Kathryn taught at Alice Carlson Elementary School, just off the TCU Campus, during that time, before their move to Henderson in autumn of 1955. Kathryn loved her church. She was baptized in the Methodist Church in water brought by the pastor from the River Jordan in the Holy Land. As a member of First United Methodist Church in Henderson, she was the first female chairman of the board, and she and Jean Craig, wife of pastor Eugene Craig, organized the first Hanging of the Greens, a tradition which continues to the present, more than forty years later. She was an avid reader, helping to organize The Friends of the Library in Henderson, and continued to be a loyal supporter throughout her life. She was the Henderson/Rusk County representative to the State Library Association for more than 35 years. She was a long-time member of Henderson Woman’s Forum, serving as its president for more than one term, a member of the Varied Arts Club, and enjoyed playing Mah Jongg with her friends. She was also active in PTA when her sons were in school. Besides her parents, she was preceded in death by her sister, Carolyn Jo Lee, and her husband of almost 68 years, Dr. James H. Mann. She is survived by her two sons: James Mark Mann and wife, Debbie, of Henderson, and Kurt Tice Mann of Dallas and fiancée, Michelle Romero; five grandchildren: Rex Mann (spouse Kylee), Russell Mann (spouse Kayla), Meredith Mann Reddy and husband, Shawn, William Mann, and Kathryn Mann; five great-grandchildren: Malley, Macy, Mark, Presley and Berkley Mann; one brother: Jimmy Tom Blankenship and wife Suzie, of Dallas; brothers-in-law Bobby Mann of Lufkin and Herbert Mann and wife Barbara of Lake Charles, Louisiana; niece Carol Lee Strouf (spouse Dan) of Beaumont; niece Carolyn Tice Coleman (spouse Jeff), of Dallas; niece Jane Kreke (spouse Henning) of Hagen, Germany; nephew Tom Blankenship of Dallas, several great-nieces and great-nephews, numerous cousins, and a host of friends. A private family graveside will be held at 11 a.m., Saturday, October 24, 2020, under the direction of Crawford-A. Crim Funeral Home. The family invites you to a remote meeting on a device of choice via the Zoom app on your PC, Mac, iOS or Android https://remotecounsel.com/zoom/meeting/MTE2Njkz Phone 646-568-7788 Meeting ID: 790-9542-548 Videoconference System H323 162.255.36.11##7909542548 SIP [email protected] ISDN Contact Us for ISDN Starts 10/24/2020 at 11:00 AM CDT Ends 10/24/2020 at 01:00 PM CDT Please download Zoom upon receipt of this invitation. If you have not installed Zoom previously, clicking the link will prompt you to install, then launch Zoom. If you've attended a Zoom event before, it will simply launch Zoom. You may call Glenda Derveloy at 903-646-2374 if you need help. My assistant Lorie, 903-646-8681, will also be available. You will join as a "PARTICIPANT". It will be best if you join "WITHOUT VIDEO". Please remain 'MUTED" so that we cannot hear you on the recording or at the service. You may contact me anytime before the service starts at my cell above or [email protected] The family requests memorials be made to First United Methodist Church Henderson at 204 N. Marshall, Henderson, TX 75652, the Rusk County Library at 106 East Main St., Henderson, TX 75652, or the charity of your choice. Words of comfort may be shared with the family at www.crawfordacrim.com.

Kathryn Tice Mann, age 94, passed away quietly on October 20, 2020, after a lengthy illness. She was born on October 10, 1926, in Gainesville, Texas, the eldest child of Tom Blankenship, a Halliburton employee, and Sarah Elkins Blankenship,... View Obituary & Service Information

The family of Mrs. Kathryn Tice Mann created this Life Tributes page to make it easy to share your memories.