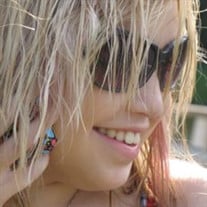 A celebration of the life of Kalynn Michelle "Varmit" Davis-Beall, 24, of Henderson, will be held at 5:00 p.m. on Monday, July 3, 2017, in the chapel of Crawford-A. Crim Funeral Home with Rev. Randy Sceroler officiating, under the direction of Crawford-A. Crim Funeral Home. The family will receive friends following the service in the chapel at the funeral home. Kalynn passed from this life on June 30, 2017, in Houston. She was born February 16, 1993, and was a life long resident of Henderson. Kalynn attended and graduated from Henderson schools. As a youth, she attended Hillview Baptist Church where she was saved and followed in believer's baptism. She was a people person who had many loves in her life. Among those was a love for reading and the piano and spending time outside whether it be riding 4-wheelers or playing in the creek. She loved animals and the Henderson Animal Shelter. Kalynn's life was not always easy, and she battled cystic fibrosis all of her life yet she didn't let it bring her down. She loved living life, even after a double lung transplant in 2010. Her bright smile and personality touched many lives and will not soon be forgotten. She was preceded in death by her grandparents, William and Myra Beall, and Wendell Lee Davis, and uncles, Jimmy Flanagan and Bobby Bynum. Survivors include her parents, Debi and Wes Beall of Minden, and Scott Davis and wife Mary of Mt. Enterprise; grandparents, Martin and Marilyn Burks of Henderson, Diana Davis of Mt. Enterprise, and Mike Taylor and special friend Debbi Corley of San Antonio; siblings, Kadden Davis of Henderson, Brendan Campbell of Overton, Kayla Prior of Kingwood, and Scott Allen Davis II of Mt. Enterprise; her fiancé, Nathan Sellers of Henderson; several nieces and nephews, and a host of aunts, uncles, other friends that are like family, and the many lives that she touched. In lieu of flowers, donations may be made to the Cystic Fibrosis Foundation at 4550 Montgomery Avenue, Suite 1100 N, Bethesda, Maryland 20814 and/or the Make A Wish Foundation at 215 Winchester, Suite 109, Tyler, TX 75701. Words of comfort may be shared with the family at www.crawfordacrim.com.

A celebration of the life of Kalynn Michelle "Varmit" Davis-Beall, 24, of Henderson, will be held at 5:00 p.m. on Monday, July 3, 2017, in the chapel of Crawford-A. Crim Funeral Home with Rev. Randy Sceroler officiating, under the direction... View Obituary & Service Information

The family of Kalynn Michelle "Varmit" Davis-Beall created this Life Tributes page to make it easy to share your memories.

A celebration of the life of Kalynn Michelle &quot;Varmit&quot; Davis-Beall,...