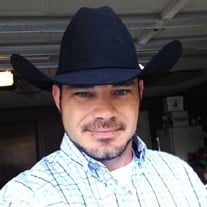 Funeral services for Mr. Justin Lynn Cook, 36, of Arp, will be held at 1:00 p.m. on Saturday, October 19, 2019, in the chapel at Crawford-A. Crim Funeral Home with Cameron Strange and Mike Rhoades officiating. Interment will follow in Restland Memorial Park, near Carthage, under the direction of Crawford-A. Crim Funeral Home. The family will receive friends from 6-8 p.m. on Friday, October 18, at the funeral home. Mr. Cook passed from this life on October 11, 2019, at UT Health in Tyler. He was born December 24, 1982, in Liberal, Kansas. Some time later, Justin found his way to East Texas where he became a lead coil operator for Gladiator Energy. Justin was a giving man, and in that spirit, he was a registered organ donor and hoped that he could help someone beyond his life here on earth. He was preceded in death by his mother, Linda Rhoades Cook; paternal grandparents, Overand and Jessie Cook; maternal grandparents, Marshall and Minnie Rhoades; and brothers, Troy Strange and Mark Lewis. Survivors include his wife, Stacey Gothard Cook of Arp; father, Richard Lynn Cook of Longview; children, Abigail, Ashleigh, Angelina, Jillian, Lillyn, Brody, and Laylonie; siblings, Jessica Robinson and her partner Leighann of Wichita, Kansas, Cameron Strange and wife Shana of Longview, Michael Lewis and wife Melissa of Tucson, Arizona, and Matthew Lewis of Wichita, Kansas; and a host of aunts, uncles, nieces, nephews, cousins, and friends. Pallbearers will be Matt Lewis, Jordan Becker, Jin Grammer, Travis Dixon, Charles Duke, and Chris Davis. Honorary pallbearers will be Ashton Robinson, Dillion Johnson, Cody Johnson, Scott Martin, Donnie Lee, and Blake Sharp. In lieu of flowers, memorial donations may be made to a Go Fund Me account that has been set up for Cook family personal expenses. Words of comfort may be shared with the family at www.crawfordacrim.com.

Funeral services for Mr. Justin Lynn Cook, 36, of Arp, will be held at 1:00 p.m. on Saturday, October 19, 2019, in the chapel at Crawford-A. Crim Funeral Home with Cameron Strange and Mike Rhoades officiating. Interment will follow in Restland... View Obituary & Service Information

The family of Mr. Justin Lynn Cook created this Life Tributes page to make it easy to share your memories.