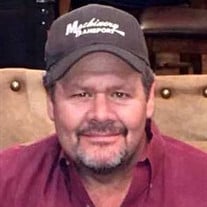 It is with great sadness that the family of Judd David Pool announces his passing at his home on Thursday, February 8, 2018, at the age of 49 years. Judd was born on March 8, 1968 in Henderson, TX to Sharon Keeling Moore and father Mack Pool. He was a 1986 graduate of Henderson High School and a lifetime resident of Henderson, TX. He was a quiet, kind hearted man who loved his family and the value of hard work. Judd was proud to follow in Mack’s footsteps in the family business and was an important part of Machinery Transport. Like all boys, he cherished his mother and the time he spent with her. Judd was a loving man who would do anything for his family & friends. Lily, his three boys, and his grandson Maverick were very special to him. He was preceded in death by his grandparents L.O. "Pete" Pool and Kathryn Pool Wylie, and A.L. Keeling Jr., and uncle Leonard Keeling. Survivors include Lily and his three sons, father Mack Pool and wife Jackie of Henderson, mother Sharon Keeling Moore and husband Howard of Henderson, grandmother Hazel Keeling of Mt. Enterprise, sons Tyler Pool, Tanner Pool, and Tugger Pool, all of Henderson, brothers Jace Pool and Jake Pool of Henderson, Austin Moore and wife Angie of Deer Park, Josh Pool and wife Heather of Henderson, and Rex Moore of Henderson, sisters Sherri Pool Kurecka and husband Dwayne of Austin, Shay Pool Ditter and husband Tom of Henderson, Tami Kelly and husband Steven of Morgan City, LA, Kelly Moore of Longview, and Carolann Armstrong and husband Jeff of Henderson, grandson Maverick Pool, and a host of nieces and nephews. The family will receive friends from 5-7 p.m. on Sunday, February 11, at the funeral home. Funeral services for Judd will be held at 10:00 a.m. on Monday, February 12, 2018, in the chapel at Crawford-A. Crim Funeral Home with Jason Taylor and Austin Moore officiating. Interment will follow at Strong Cemetery under the direction of Crawford-A. Crim Funeral Home. Pallbearers will be Jay Guin, Charlie Bridges, Randy Duke, Kyle Keeling, Terry Teakell, and Oscar Gonzalez Sr. Honorary pallbearers will be Charlie Mooney, Frank Knight, H.B. Armstrong Jr., and Colton Michael Wallace. In lieu of flowers, donations may be made to the Shriners Hospitals for Children®, Office of Development, 2900 Rocky Point Dr., Tampa, FL 33607, and/or Strong Cemetery at 2000 E. Main St., Henderson, TX 75652. Words of comfort may be shared with the family at www.crawfordacrim.com.

It is with great sadness that the family of Judd David Pool announces his passing at his home on Thursday, February 8, 2018, at the age of 49 years. Judd was born on March 8, 1968 in Henderson, TX to Sharon Keeling Moore and father Mack Pool.... View Obituary & Service Information

The family of Mr. Judd David Pool created this Life Tributes page to make it easy to share your memories.

It is with great sadness that the family of Judd David Pool announces...