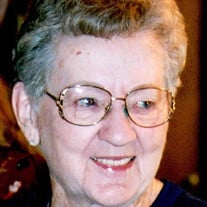 Juanita Wynne Jameson, lifetime resident of Tatum, Texas, passed away on February 12, 2020. She was born in Tatum, Texas, February 10, 1919; one hundred and one years ago. She graduated from Tatum High School in 1936, then attended College of... View Obituary & Service Information

The family of Mrs. Juanita Wynne Jameson created this Life Tributes page to make it easy to share your memories.